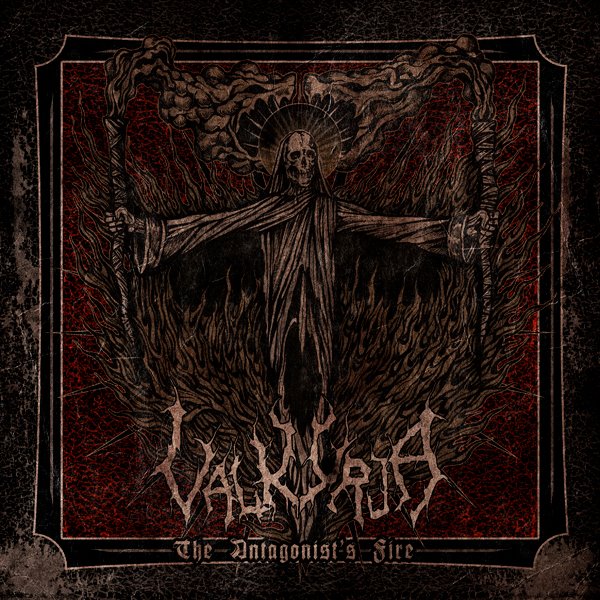 Review by: Omer
I think I’ll start from the end – The Antagonist’s Fire, makes all of Valkyrja‘s previous albums pale in awe. True, these Swedish Black Metallers had some very fine moments, with The Invocation Of Demise and further more with Contamination from 3 years ago, which was also a soul ripping album.

But this… this is something else. The Antagonist’s Fire presents the band in a whole new level of development, whether it be musicianship or creativity in their dark arts. Although I liked Contamination quite much as I mentioned, it did leave an unexplained gap, an incomplete feel to it if you’d like, every time it finished spinning and indeed, I was afraid the new album would bear a similar characteristic. Oh boy, I was wrong.

“Betrayal Incarnate” began with a slow, poisonous riff that made it’s way slowly into my gut, when all of a sudden, the song simply explodes and turns into a swirl of flesh ripping guitar work with fast-as-fuck drums to match up. In fact, J. Wallgren does such a fantastic job on this album, that at some point I was quite hyped about it and forgot about all the rest. To top it all, A.L’s attacks on the microphone are ruthless and take up a much more major role here than before, while his tone remains harsh.

Second comes “The Cremating Fire” and so far, it seems that the talented Swedish gang are not letting their foot off the gas as this four and a half minutes of pure hell, would reveal. Good passages between the melodies are easily bringing the song to whole new level of interest and the various vocal tone changes, are a fine example of how much the band managed to overcome their previous works.
The melodies here are filled with malice and do not mistake to think these are lightweight in any way, as “Madness Redeemer” and “Years To Burn” would prove you wrong.

Valkyrja did magnificent job with their new release. The variety and amount of layers are just enough to keep one stuck to the album, but aren’t too much, to the point that the listener gets tired. That is a trap a lot of bands are falling into, and I’m quite glad to say that these Swedes successfully avoided it and not just that, but they excel while doing so.

“Euology (Poisoned, Ill And Wounded)” is perhaps one of the best songs around here, it’s structure is relentless and builds up to a point when it even gets more aggressive, while from time to time, atmospheric moments would fill your ear drums with anticipation (before blasting you to hell and back).
Given that the listener’s ears are not totally bleeding at this point (which is a good thing… I think), “Season Of Rot” ‘s Black Metal by-the-book would change it pretty fast and together with “Treading The Path Of The Predator”, I cannot help but feel that the band really gave all they could to make this happen.

The latter, being a gem in the genre – mixing up everything the band did in previous songs, throwing in some Dissection with Valkyrja’s own twisted material, and ripping away with one of the best songs I’ve heard during 2013. Changes of musical tones, ever-changing song structure, and a bunch of damn high quality level musicians that knows exactly what they want to achieve here, results in an attack on the genre’s major forces and bands. The different elements are successfully interwoven into one big fabric of pure hellish sound and one of the best atmospheric moments ever achieved by a band.
Valkyrja didn’t invent the Black Metal wheel and are not terribly original, but they are sticking out and for a good reason – they’re simply good at what they do and they work hard to get there. The Antagonist’s Fire has been in the making for quite some time, and the outcome is simply great.