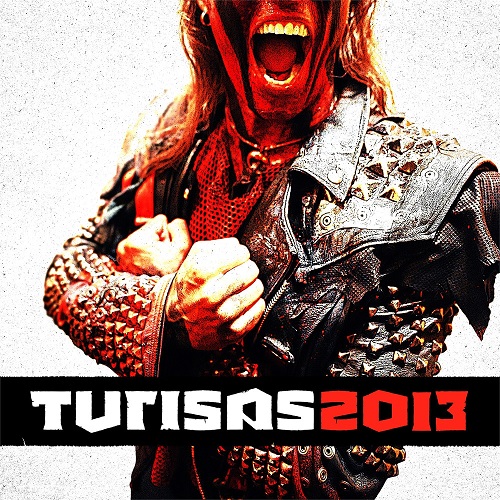 By Laetitia
Turisas2013. Let’s jump right into it and get over the first hurdle: the witless name of this record. You’d think the band could have come up with something a little more creative, but they didn’t. To give them some credit, the name got you talking right? Still, I doubt anyone will appreciate this. Another thing to notice about the new effort, and probably to the disappointment of many, the album does not cover an epic historical concept this time. So, what does Turisas stand for in 2013?

The band has toned down the epic trumpets, exhilarating battle hymns (a lot of chants are still present though), sounds and war cries that you’d expect from Turisas. The song structures, rhythms and the tempo are different than before, it’s something you’ll surely have to get accustomed to.

Turisas2013 can be described as sounding a lot more like heavy metal with progressive synths, horrible 80 ‘ies pop (The Days Passed), jazzy influences (Run Bhang-Eater, Run!) and even a weak variation on punk on No Good Story Ever Starts With Tea. Of course, the last is a drinking song, but in comparison to what they’ve written before (One More) and booze tunes of other folk bands, this doesn’t even measure up to a simple Beer Beer Or Rum or Twilight Tavern.

A lot of fans might instantly dislike this effort, because it’s not the epic, symphonic, battle metal (and yes, often cheesy) Turisas they want. Which was one of the biggest selling points of these Finns. If you can overcome this issue, Turisas2013 can grow a little on you. Some tracks are simply not more than mediocre. These are a mix of toned down symphonics and the earlier described influences, which just doesn’t leave an impression. F.e. Ten More Miles and the ones described above. Into The Free both musically and lyrically sounds like a rip-off of Stand Up and Fight songs, so that can be a consolation for some.

Tunes that stand out positively are For Your Own Good, Greek Fire and We Ride Together. For Your Own Good is very different from the ‘old’ Turisas. Yet, here the change worked out well and the ‘light’ style of this track sounds good. Greek Fire is the heaviest, guitar-driven track. We Ride Together has a bit of a Battle Metal/The Messenger start and the musical direction and lyrics alike the later efforts. This combination makes it an interesting track.

So, Turisas2013? I have no problems with bands trying new stuff. Even if it means leaving behind a well loved concept. But this change brings along just a handful of nice songs and the others range from mediocre to bad. Conclusion: Turisas2013, a honest attempt to doing something different, but it could have been much better.