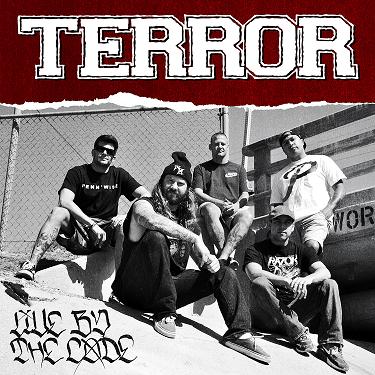 By Laetitia
American hardcore band Terror has spent the last ten years working its ass off. Since the group was founded in 2002 six albums have been released, and than we are not counting the loads of demo’s, EP’s, splits, re-releases and DVD’s.

Live By The Code is the seventh effort. As fans of the Terror will expect: they stubbornly choose their own path and do not listen to others. There you go, a classical Fuck All attitude. What this actually means for the album is, sticking to the roots as the scene straightjacket does not permit too much musical frills.

Altogether, the record is a short, but powerful statement. Most songs clock under three minutes and all contain the recognizable Terror characteristics: it’s raw (more than Keepers Of The Faith, a little less polished) and the music and vocals are filled with anger. (Just listen to Shot of Reality: ‘Life is not fair [..] no one gives a fuck about you’).
The title track is actually the shortest and probably also the toughest. In under two minutes you’ll here everything Terror stands for at its loudest.

As mentioned before, do not expect groundbreaking stuff on Live By The Code. It’s not there. Therefore it’s hard for fans of the band to actually be disappointed by Terror, because they are doing what they do best. Still, it is all a little unimaginative. For metal fans that want to explore hardcore, this album could be interesting. Yet, any Terror record could be suitable for that purpose.