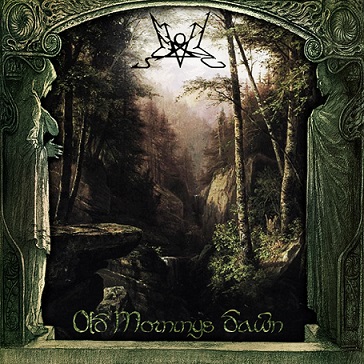 By Laetitia
‘Highly anticipated’ is often just a label to boost the new album of an inactive band that decided to give it a go again or something alike. But some records are truly ‘highly anticipated’ by many fans. The seventh effort of the Austrian atmospheric black metal band Summoning can be counted among those rare pieces. Seven years were between the previous release, Oath Bound and this upcoming album titled Old Mornings Dawn. The frightening question that arises with is this: was it worth the wait?

The intro Evernight starts calm, with a sinister atmosphere. When the folky keyboard tunes blend in, accompanied by the enthralling sound of battle-like marching drums, you immediately feel embraced by the distinctive sound of Summoning. The sound of the record has a raw edge, something they could have improved with the backing of a label like Napalm Records, but since this sound part of their charm, a smooth mix would not have been suitable.
In comparison to Oath Bound, it seems that the musical duo Silenius and Protector ruffled up their perfect feathers even more, going for a more rough feeling of the album.

All in all, Summoning has not strayed far from its path. Musically it is a sensible and satisfying continuation of their previous works. The heavily distorted guitars, songs layered with synths, majestic hymns and thunderous horns lure the listener straight back into the heart of Tolkiens shaped Middle Earth. One of the highlights that demonstrates this is the second track, Flammifer.

Other songs simply build on the bands heritage, like The Wandering Fire. The album closes with a killer as well. The vocals on Earthshine are more outstanding than on the other tracks, creating a renewed sound. Most tracks near the playing time of about ten minutes. The only song that suffers from this is The White Tower. It builds up a tension, but fails to reach a peak, thus becoming a bit of a drag after several minutes.

So was Old Mornings Dawn worth the wait? Yes, maybe Silenius and Protector could have pulled of two years more (but we are glad they did not). This album is another milestone in the unequaled career of Summoning, whose weaker efforts were also hailed with open arms. I would not place this record directly at the top of Summonings discography, as yours truly is still fond of Oath Bound. Yet it is very understandable if other fans would. Old Mornings Dawn marks the epic return of Summoning, and let’s hope the next release will be just as glorious, even if we’ll have to wait a while.