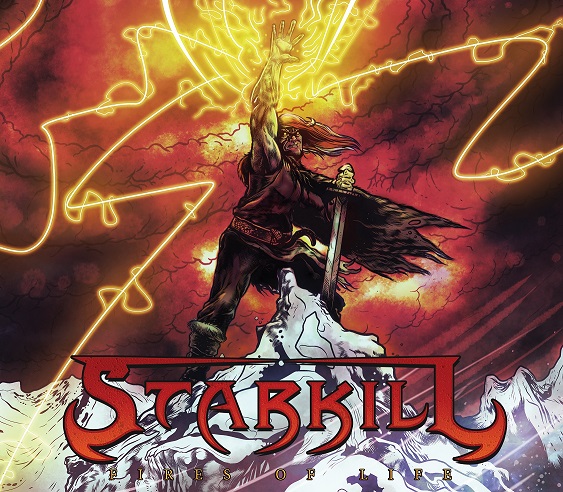 By Laetitia
A lot about Starkill is misleading. First off, the band name and the album cover. I expected power metal to the fullest, and the first seconds of Fires of Life, led me to believe that was the right. Second, these too clean, neatly dressed American youngsters with slick make-up appear like they could play in any mediocre emo/metal core sort of group. In the end, this band proved to be something else entirely..

The debut of the foursome, Fires of Life, is heavily influenced by bands on our side of the Atlantic and the guys take pride in that. On this record, you will hear melodic death metal with shredding guitars, like Alexi (Children of Bodom) himself recorded them, fast power metal alike Dragonforce, similar to the songs that will make you lose Guitar Hero (Fires of Life), blackened death metal grunts ala Dimmu Borgir (Whispers of Heresy), symphonic parts and sometimes even a gentleness that reminds of Nightwish (This Is Our Battle; This Is Our Day). All in one album? Hell yes!

Even though at some moments an overkill of these various elements is lurking, most of the songs are balanced well. The moments that yet another solo will make you want to damp your fire of life are avoided. Also, in spite of the many different elements, Starkill knows how to retain a recognizable sound throughout the ten tracks. These musicians are very young, but they seem to have the skills and talent to make the material on this album flow together perfectly.

Aside from the people with a more distinct, often heavier taste in metal, the majority of metal fans could certainly fall for the charms of the Chigaco-based Starkill. This new found band by Century Media made a very impressive debut and if you are into (one of the) the bands named above or just generally a metal fan, this is your band; this is your album.

Rating: 8.5/10
Track list:
1. Whispers of Heresy
2. Fires of Life
3. Sword,Spear, Blood, Fire
4. Below the Darkest Depths
5. Immortal Hunt
6. New Infernal Rebirth
7. Strength in the Shadow
8. This Is Our Battle; This Is Our Day
9. Withdrawn From All Humanity
10. Wash Away The Blood With Rain