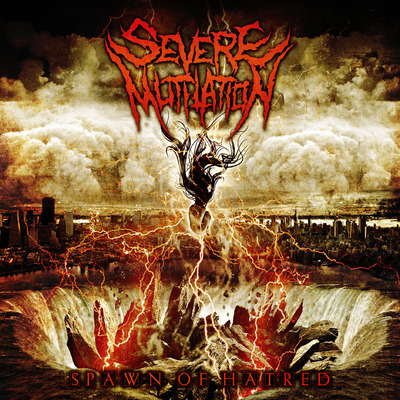 By Wouter
Severe Mutilation is a death metal band from Bayamon, Puerto Rico. Started in 2008 under the name Bloodspill but later changed it to Severe Mutilation. They’ve released their first full-length, Internal Putrefaction, in 2010 and now they’re ready to release their second full-length, Spawn of Hatred. Get ready for some straightforward death metal!

The record starts with a little intro ‘God is not Here Today’. From that moment on, the devil takes over. In-your-face death metal with old school influences from the pioneers of death metal. This means that there are also some traces of thrash metal, just like with bands like Vader. Both styles blend in very well and the drums are a big part of it, switching between those tempos. Luckily, the snare sounds like a machine gun so those blasts are great! The deep growls also confirm the absence of God. The thrashy riffs and tremolo picking riffs fit in very well.
Spawn of Hatred is a strong death metal release. Don’t expect something groundbreaking though. What they do, has been done before, but they do it very well. Old school death metal with obvious traces of thrash metal like Vader. So, try it death metal fans!

Rating: 7/10
Track list:
1. God is not Here Today
2. Practice What You Preach
3. Spawn of Hatred
4. Unholy Inquisition
5. All Respect for Life is Lost
6. The Faceless Horde
7. I Kill for God
8. Fuck the World and Bring on the Hate
9. How the Few Rule the Many
10. My Misery Shall be Your Tragedy