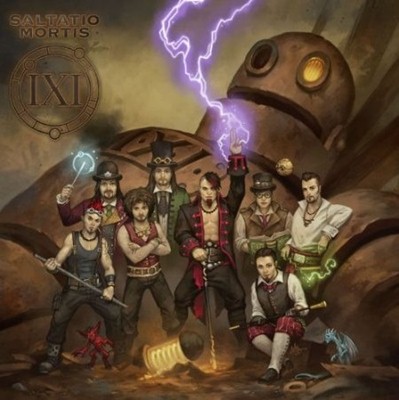 Recordlabel: Napalm Records
Releasedate: August 16th 2013
By Michael
It has been a while between studio albums, but Saltatio Mortis gives us something completely new, mixed with a bit of old on their new studio album “Das Schwarze Einmaleins”. As you might remember, their previous album, “Sturm aufs Paradies”, was a pleasant surprise for me. So as you can imagine, I was quite curious about what this new album would bring.

Starting from the first note, it is clear that Saltatio Mortis wants to mix things up. On Sturm auf Paradies the band had a clear medieval folk sound. That sound has been shoved towards the background a bit, leaving room for experiments. Especially the first two songs need some getting used to. “Frueher war alles besser” is a song everybody can relate to lyrics wise. Somehow the song song sounds really joyfull, bit also a bit poppy. “Wachstum uber alles” starts off heavier than anything I knew from the band up to now. This is also the first single of the album and reminds me a bit of the musical styles of Oomph! and In Extremo.

Starting from the third song, the album gets better and better. In “Krieg kennt keine Sieger” the band mixes some arabic influences in with their typical folk sound. Next up is my favorite of the album. “Der Kuss” is exactly what I liked about Sturm aufs Paradies: up tempo, great rythm and sound.
I don’t really know what to say about “My Bonny Mary”. Technically the song is good, but after hearing the song a couple of times, I still cannot hear if the song is in English, German or both. “Sandmann” is a cute ballad which slows the album down, but not in a bad way. It gives you some time to process what you have heard up until now. The songs have been quite different.

“Idol” starts great and keeps a nice tempo during the whole song. In this song once again the folk influences are back as the main ingredient. The same can be told for “IX”. This is the Saltatio Mortis I love and actually if the whole album was filled with songs mainly like these, it would have been even better.
After another ballad and some more arabic sounds, the album ends with a slow yet powerful song named “Randnotiz”. This song comes with a certain moodsetting. Somehow I can see myself standing in a crowd, on a medieval festival. This is the effect that songs should have.

Saltatio Mortis has once again delivered a decent album. Yet the problem is that it seems as if they wanted to experiment with some different sounds. In this case the most impressive songs are once again the songs that have the same style as the songs on Sturm aufs Paradies. If the album had more songs like Der Kuss, Idol, IX and Randnotiz, it could have clearly been better.