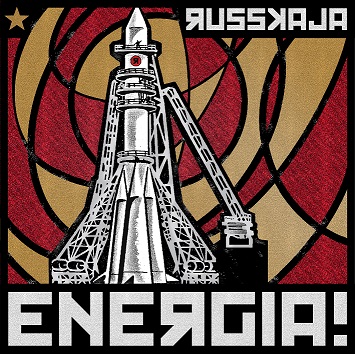 By Laetitia
Russkaja is a slightly unordinary band in the ranks of Napalm Records. They call it ‘Russian Turbo Polka Metal’. Meaning, musicians from Russia, Ukraine and Austria serve polka beats, a bit of thrash metal and other world music influences. Energia! is their third studio record. The reason why it’s uncommon for a metal label, is that the metal part isn’t really dominant. Whether you like this or not, is really for you to decide.

The opening track Energia track already exemplifies this perfectly. The ska influence is very clear and there are also some Balkan instruments hearable. Only the chorus features some power chords. This music has the clear goal of making you dance like crazy, it’s fast and swinging. In a live show, nobody would be able to stand still for long. The upbeat feeling stays with you throughout almost the entire albums, just as the musical influences mentioned before.

A track that stands out a little more it Istanbul, it has the same elements as mentioned before, just bit of an eastern atmosphere what makes the song more different from the others. It also contains some vocals in Turkish, not often heard in metal (if you want to classify this as metal). Violina Mia is one of the most calm moments of this album. After this, it’s time for more energetic tunes, like Dikije Deti. The first song where you feel metal would actually be appropriate, but with aspects your used to from Russkaja by now. Entirely unexpected, the record does not close with a song that blows your head off because of all the energy. It’s actually a ballad-like track called Sorry. Even though it sounds okay, it doesn’t really seem to fit the energy of Energia!

This album leaves me with mixed feelings. Generally, I’m open minded towards music that is uncommon (in metal or other genres as well) and I mostly like it. Russkaja produced something nice, but it’s over the top. A bit like Die Apokalyptischen Reiter with the extraordinary influences, but magnified innumerous times and way less metal. Some songs really sound like they could be featured in the Eurovision song contest. So, unless you are very intrigued by the mix that Russkaja provides, I don’t think this is something for you. Sure, the band will gain some fans during live shows, but I don’t expect thousands of fans from the metal scene will emerge.