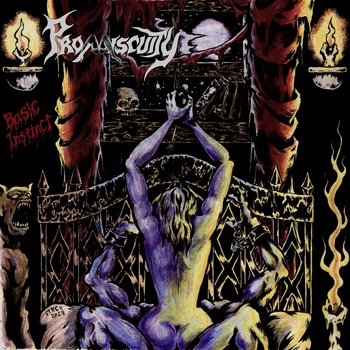 By: Omer
The small, mid-eastern country of Israel is usually brought up when speaking about bands such as Orphaned Land, Salem and in recent years also Sonne Adam. As an Israeli myself (who works in a Dutch magazine, in the English language, what do ya know!), it’s sometimes a shame that the international crowd is less exposed to a wider variety of bands that hail from this small strip of land.

Don’t get me wrong, because as the case in any country – most of the metal bands are… well, form up a pile of crap, while from time to time, nice pieces emerges and on rare occasions, even burst out of the local crowds and into the world. Promiscuity‘s new EP is an example of exactly that.

These guys were formed back in 2010 and released a demo tape a year later, entitled “Infernal Rock ‘N Roll” which later on spread out to 400 listeners, worldwide. The raw sound, the Venom meets Hellhammer meets rock ‘n roll was exactly spot on and reviews on underground webzines started pouring their compliments.
Now, Basic Instinct, intends to repeat that same pattern in an even more barbaric and disgusting way.

The EP rips open with “The Beauty And The Bitch” and it presents the same line of raw material and spewing filth, and while being as basic and primitive as this kind of music can get – it’s catchy and is quite successful in maintaining a right level of interest.
“Pedophile” continues the line of one of the most unsophisticated (in a good way!) EP’s you’ll ever listen to, with fast riff works, mixed with the gutted vocals of Butcher, making the title Basic Instinct loyal to the material.

It’s a short and deadly release, and while “Into The Crypts Of Rays” by Celtic Frost was a nice tribute indeed, it unfortunately felt as a filler. The last track (named “Maniac’s Blues“) really hits your ear drums as a worthy ending . You’ll find yourself banging your head in an instant, as the oh-so-familiar-guitars would pierce your heart through that special little spot that’s reserved for old school sounding bands that remind you from time to time, why the hell you even listen to this kind of music.