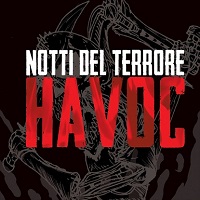 Out of the remains of the Belgian groove metal band Tud Russel, Notti Del Terrore was created. Vocalist KVN and bass player Wim wanted to take a more aggressive and heavy direction, so when their former band ceased to exist, these guys started to work on new music immediately. Their debut (MX D35TRX10N) was released in 2011 and this effort, Havoc, is the second full length..

First of all, Notti Del Terrore does not play a traditional style of metal. They are influenced by bands as Fear Factory, Ministry and Killswitch Engage. You hear heavy, modern metal, very rhythmic guitars and a groovy base provided by the bass and various vocals: clean and grunt-like. That in itself is not something special or new, but the songs are varied and because of that it sounds fine. Also a plus, the record isn’t that long, so you are not bombed with the same song structures and riffs all the time. Some tracks, like Recharge and Fixless, are supplemented with industrial/mechanical sounds, this adds to the sometimes unconventional character of the music.

Fans of the former named bands should check Notti Del Terrore, maybe they’ll discover an interesting new group. If you aren’t into that kind of metal, don’t bother to listen to Havoc, it will not be worth your while.