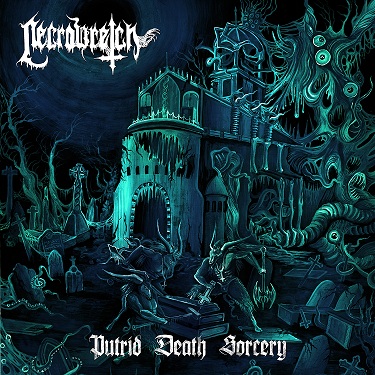 By Laetitia
Putrid death metal from the gory depths of hell, voices of damnation, unholy riffs and bestial drums. This is what you will find on the debut album of Necrowretch. Only after releasing two demo’s they got signed by Century Media and attempt to take over the world with Putrid Death Sorcery.

Necrowretch is a young, French band. Their style is similar to Old School Death Metal alike Entombed and Death, but also black metal influences can be tracked in these tunes. Mastermind Vlad was inspired to create up with his own Scream Bloody Gore. This record is unlikely to end up like such as classic, because of a lack originality, but it is good stuff for fans of the genre at the very least. The sound of the album has the typical resonance of masterpieces back in the day. The blasts beats indeed succeed one another with a bestial velocity and the riffs are uncomplicated, mostly death metal style. Also, the screams could come from Satan himself. Even the lyrics: “Stenches of death, blood and sulfur makes you puke life to the necromancer”, certainly add to the obscure atmosphere. None of the songs really stand out though, with the exception of ‘Impious Plague In Catacombs’, which has a good dynamic in speeding up and slowing down. The other songs aren’t distinctive and don’t leave much impression other than: this is an okay death metal track. So, although I do recommend this album to fans of the genre, I’m also positive Necrowretch could have made a better debut if they really wanted to.