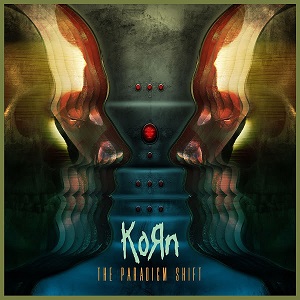 The Path of Totality (2011) proved once again that Korn does not shy away from boundaries. The upcoming effort of the American band marks a return to a more classic Korn sound. It also marks the return of guitarist Brian ‘Head’ Welch after his departure in 2005. Now what does the 11th studio album, The Paradigm Shift, exactly hold for us?

On Guitarworld.com, guitarist James “Munky” Shaffer explains the title: “It’s a term encompassing different perspectives. You can view a piece of art from one angle and it takes on a certain image. If you look from another angle, it’s a completely different image. We liken that to Korn in 2013. With Head back in the fold, all of the elements fans have loved since day one are there, but we’re interpreting them from a new perspective. It’s a bigger, brighter and bolder Korn.”

The record starts with “Prey For Me”. It starts with heavy riffs and a bass groove characteristic for the group. All in all, the track is trademark Korn, with a catchy chorus and probably one of the more aggressive tunes on the album. In the same way “Love & Meth,” and “What We Do,” does not disappoint. “Spike in My Veins,” is a bit poppy, but also brings back the sound from The Path of Totality: the use of electronic music. Still, not in a measure as on the previous effort.

“Never Never,” has already been released on a single. It’s the outsider among the 11 (or 13) tracks. The music is a lot more accessible and the chorus simply poppy. Is that a bad thing? No, not if it is well executed, but Never Never lacks interesting vocals and music (and again a lost scrap from The Path of Totality, which does not suit the track). “Lullaby For A Sadist,” starts off with great vocals of Davis. It would have been nice if it continued in a ballad, but instead you get a cheesy chorus. The rest of the songs are somewhat like the previous ones. The deluxe edition of the album features two more songs “Wish I Wasn’t Born Today,” and “Tell Me What You Want”.

All in all, Korn has returned to their original sound. People who really enjoyed The Path of Totality are in for a weaker sounding album with The Paradigm Shift. The extra, powerful dimension that the former effort contained, has been reduced to some stray electronic influences. This might be to the relief of some, but a downside is that this opened up room for safe riffs and dull choruses on some of the tracks. Still, most of the songs sound good. The album is a safe investment for the long time fans.