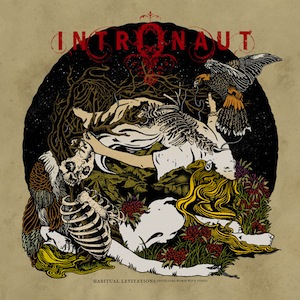 By Laetitia
With the release of Habitual Levitations, prog metal fans around the world can start making their 2013 year list with favorite records. The 4th full length release of Los Angeles proggers Intronaut, is just like the previous albums of these guys anything but a disappointing effort in the genre.

One thing about prog metal songs is that it is they hardly ever similar to each other. This is an aspect I actually like a lot, since in other metal genres you drown in it. Of course Intronaut latest features elements that you can recognize. Like Sacha’s mellow but also mesmerizing vocals, the complex bass patterns and seemingly out of place passages (in “Harmonomicon” for example). Still, as fans of the band should know, predictable is not a word to describe this material with.

Getting in depth on the nine tracks does not suit the album. Giving some keywords to describe them, is basically doing injustice. Aside from that, the performance of the songs by these guys is excellent. All the musicians seem to get equal space to show off their skills.
The songwriting is great as well. However, as prog metal is not really my favorite field to play around in, the tracks sometimes wonder off to much and dreariness sneaks in. For me, this album balances between a bit too much and perfectly fine, but with each spin Intronaut seems to win some ground. Fans of the genre will surely appreciate Habitual Levitations and it is a must listen. Metal fans who aren’t really touched by prog, by all means, leave this album aside.