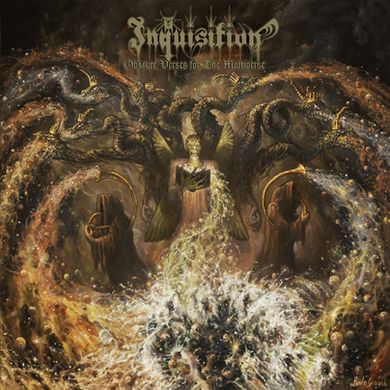 By: Omer
Inquisition have been a formidable two-man band for a long time now, making a steady name for themselves as they’re ripping out hearts and ears with their hellish tunes and memorable albums. This talented duo of darkness, Dagon and Incubus, have created some of the best Black Metal albums in recent years thus positioning themselves in a very respected spot on any extreme Metal fan’s shelf.
Now, a new name is added – and traditionally with Inquisition, it will be a long one so take a deep breath – Obscure Verses For The Multiverse.

A pile of reasons is in favor of Inquisition offering a new release – fame and reputation in most of Black Metal listeners worldwide, a ton of experience from past years and even a brand new contract with Season Of Mist is in order.
It would be hard to top 2011’s “Ominous Doctrines Of The Perpetual Mystical Macrocosm” but as soon as the new album landed on my desk, I knew something good is brewed here.
“Force Of The Floating Tomb“, together with the second track, opens the album with the two most familiar sounds in the Inquisition arsenal – the sickening riffs and the ultra-rasped vocals. It is quite clear that the band didn’t move more than an inch away from their previous lines of work, and while the new album is far from being the most original piece in the band’s career, it’s a highlight nonetheless.

If I’ll have to point out a difference, I’d mention that the new release lacks a little of that specific groove and catchy moments the previous album had plenty of, for example. Obscure(…) still have those parts, but in a more subtle sense.
Do not worry, as the same blasting aggression is still present and the powerful hymns that Inquisition are renowned for are here without any means of mercy to shed on the listener. The common listener’s ear would simply be crushed during the title track, while “Master of The Cosmological Black” shows a fine example of the Inquisition attitude – no backing down, no compromise on even the smallest of sounds. Not to forget that they’re probably the only good Black Metal band out there that sounds just fine without a bass player.

The well known, hand-picked melodies that Inquisition are famous for tend to slow the rhythm down and crawl under one’s skin, turning the music into a roller coaster of harsh riffs that pierce their way through the flesh as heard in “Joined By Dark Matter And Repelled By Dark Energy” and “Arrival Of Eons After“. The latter, also being one of the best gems Inquisition ever wrote and is a major highlight in the new release. The production level in the new release is somewhat clearer and more crisp than what we got used to, but it’s dirty enough to keep up the level of sickening atmosphere.
Obscure Verses For The Multiverse is most certainly not anything a veteran listener of Inquisition or of Black Metal in general, would be surprised to hear and chances are he won’t find too much originality or anything else that would knock him off.
But, one can definitely count on this dark two-men band to deliver exactly what’s expected of them – Black Metal the Inquisition way – a filthy, crawling, devilish version of it. And that’s how we like it.

5. Master of the Cosmological Black Cauldron 04:44