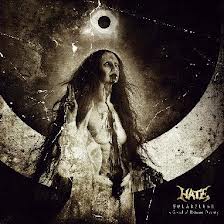 On this album you can expect 90’s death metal which you are used from these guys. The melancholic melodies and powerful vocals match perfectly. Which creates a dark and powerful atmosphere. And then there are the blastbeats to wake you up. Although they focus more on the groovier tempos now. So in general this is a more easy-going version of their previous stuff. And the drummer does the double bass through most of the songs, even during the mid-tempo parts. But this is an interesting listen nonetheless. Also interesting for people who are more into modern style of death metal because of the grooves.
Solarflesh is a decent record from the Polish death metal scene. More focused on grooves and atmosphere rather than blastbeasts, but there still are ofcourse a fair amount of blastbeats. The biggest highlight are probably the vocals. And let’s face it, it’s pretty much the same stuff they did the last few years. Decent, but nothing groundbreaking but it’s definitely worth to check out for fans of the Polish death metal scene.