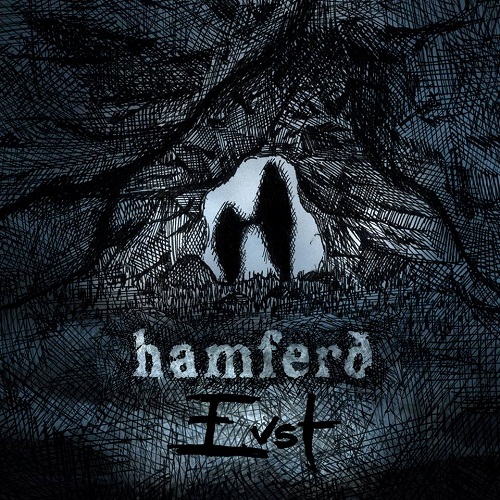 Hamferð, doom metal, usually not exactly first choice in music. But after seeing them perform during the Wacken Metal Battle on Wacken 2012 (which they won!!!), I gladly say YES! to their debut full-length album and was willing to welcome it with open arms.

These Faroese guys are well on their way to becoming one of the best in their genre. The band was founded in 2008, released their first EP ‘Vilst er síðsta fet’ in 2010 which got praised by the critics. Like I mentioned, they won the Wacken Metal Battle in 2012, have played on some other big festivals through Europe as well. And now that the word about this band is spreading, and their fan base is growing, it is about time they released their first full length.

I don’t even know where to start to tell you how great Evst is. That the guys from Hamferð are talented and passionate musicians, is something I already figured out before listening to this album. But what they’re showing on Evst is beyond my expectations. The passion, emotion and despair touches you in every tune they’re playing. Especially Jón Aldará his voice sets your teeth on edge, in an extremely positive way ;) As well his clean crying vocals, as his deep dark grunts give you goose bumps, mostly during Vid Teimum Kvirru Gråu, which is also by far my favorite song on this album.

But also dark riffs and excellent guitar work create a perfect dooming atmosphere. Well known Faroese musician Eivør Pálsdóttir appears during the song Sinnisloysi and gives the perfect touch of female vocals to the most darkest of songs on this album.

I don’t speak a single word Faroese, but when reading that ‘Love, loss and solitude compose the core of the bands poetic lyricism’, I have no problem believing this at instant. This is the feeling and the atmosphere that Hamferð creates from the opening tune of Evst untill the last note in Ytst. Mostly heavy, sometimes a little lighter. I don’t have much words left, beside that I can’t really explain this album to you. You just have to listen to it, and you will understand what I’m trying to explain, and feel the magic of it!