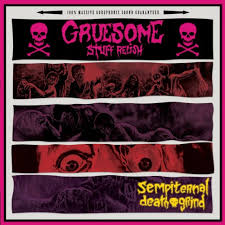 By: Ingrid
A new year, means getting to know new bands. And the one to start with for me is Gruesome Stuff Relish. Strange that I never heard of this band before, because the bands they can be compared with (General Surgery and Haemorrhage) aren’t exactly unfamiliar to me.
After a few splits they are now about to release their third full length at the end of January, so time to check it out!

When it comes to Sempiternal Death Grind it’s easy: what you read, is what you get. The band is clearly inspired by the Swedish (old school) Death Metal, and one of the few facts that sets them apart from these bands is that Gruesome Stuff Relish is actually from Spain.
Add a nice twist of Grind and gore to this image, and your picture is complete.

When the first song ‘A Date With Fulci’ sets in, this influence of the Swedish Death Metal is immediately clear. The only thing that might take you by surprise are the vocals. These are so raw and deep that they would have been expected more on a black metal album, and somehow remind me of the ‘band’ Dethklok. Nevertheless they fit the album perfectly well, since the theme of it is all about horror. Especially in the song S.O.S. where they go as low and gore as they can possibly go, they serve the album pretty well.

They influences of the Grind makes me want to see the band perform these songs live, cause it will guarantee a good party. A song like ‘Became a Zombie’ and ‘In Death We Breath’ make perfect live songs and will get the crowd moving for sure. With its up-tempo sound and almost humppa influences on which you simply múst bounce!

In the end, Gruesome Stuff Relish has produced a perfectly balanced album. The drums are varied, the guitar-riffs are tight, the vocals are extraordinary and the overall feeling is (as announced) creepy and intense, but still puts you in a death-grind party mood.
I can’t wait to see this band play on a festival like Neurotic Deathfest, Death Feast or Party San!