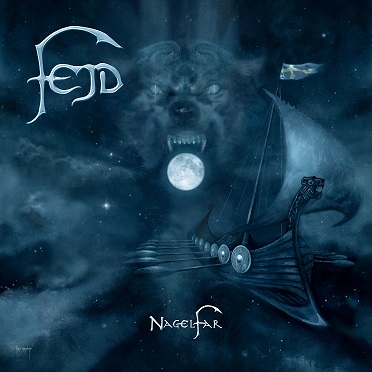 By Laetitia
The Swedish brethren Rimmerfors and their merry men Lennart Specht, Thomas Antonsson and Esko Salow of Fejd have named their third longplayer Nagelfar. In Nordic mythology, this mythical long ship (Naglfar or Naglfari) is built with fingernails and toenails of the dead. During Ragnarok, this eerie vessel shall set sail. Thankfully the record is not that gloomy..

The first song, Ulvsgäld, sets the tone for the entire album. After the intro, you’ll hear the characteristic instruments that these Swedes use, amongst others, the Moraharpa. As the key to every Fejd record is the use of such folk instruments (also including a Swedish bagpipe and a mungiga or Jew’s Harp) and the vocals of the brothers, it easy to think that most songs of the albums sound much alike. Some parts of Sigurd Ring could have been easily recycled from a previous effort for example.

The title track, Nagelfar, proves that there are also more authentic material awaiting the listener. The song reflects the gloomy atmosphere that surrounds the mythical vessel. Den Skimrande was already released as a videoclip for the fans. It is a song that is perfect for a show of Fejd, because of a fast pace and merry instrumental parts. Other songs that deserve mentioning are Fjärrskådaren and the lovely ballad-like Vindarnas Famn. They prove again that Fejd is capable of interesting songwriting and dynamic use of their instruments.

Altogether, Nagelfar is another enjoyable effort by these five Swedes. With enthralling, upbeat and simply beautiful music, folk fans will be swept off their feet by Nagelfar and they would surely offer their fingernails and toenails for it.