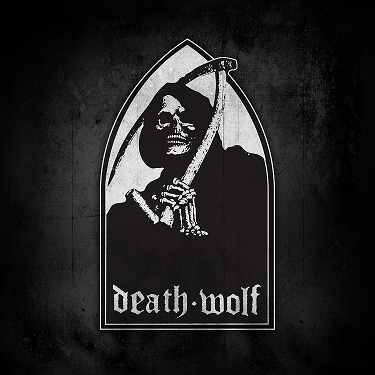 By Laetitia
When Marduk was added to the line-up of artists of Century Media, they also inked another deal. The band Death Wolf of Morgan Håkansson (guitarist and founder of Marduk) is now also a part of CM’s family. The Swedes already released a debut record with another label, but remained relatively unknown. With this second album: II: Black Armoured Death, that is about to change. The hour of the wolf has come..

They started as Devils Whorehouse, a tribute group to bands like Misfits and Samhain. When the band members felt that they had outgrown this stage, they continued to expand their own sound and it resulted the birth of Death Wolf. Yet, these guys did not abandon their punk roots completely as the raw vocals of Maelstorm and straightforward and sometimes power riffs testify.

In the song ‘Lord of Putrefaction,’ some clean vocals were added. Although in some of the tracks this kind of singing adds atmosphere to the music, in this song it’s pure horror. The whiny, nasty vocals make me want to skip the track altogether. In other songs, f.e ‘Malice Striker,’ they are less dominant and endurable. However, a more suitable singer for these parts would be nice. Outstanding is definitely ‘Little Black Angel.’ The simplicity of the music and intense vocal parts make my personal favorite on the album.

Aside from being influenced by punk, the music on II: Black Armoured Death also has a dark atmosphere that originates in metal. The slow, immersive guitars common in doom, but also faster tracks with raw black metal riffs give the record an gloomy edge. This combination of styles makes the album dynamic and before you know it, the approximately 47 minutes are over.

Admittedly, I wasn’t impressed during the first songs. Yet, appreciation for Death Wolfs music grew slowly. With a diverse and noteworthy sound, they have the potential to appeal to metal heads and punk fans with a liking for a sinister style. Thinking about it, that’s probably a lot of us, so give this record a try!