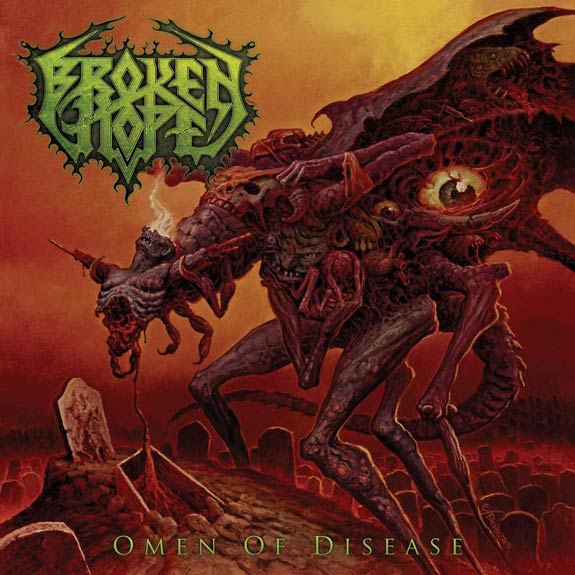 By Wouter
Broken Hope is a death metal band from Chicago. They started in 1988 and released 4 albums before founding member Jeremy Wagner decided to put the band on hold in 2002. Years later, Jeremy Wagner, Joe Ptacek and Shaun Glass, discussed the resurrection of Broken Hope. After the original vocalist, Joe Ptacek, committed suicide in 2010, Wagner and Glass decided to bring Broken Hope in 2012 back to life – forever. This is their first release after more than a decade!

Omen of Disease is a 90’s death metal record with a modern touch. At first it sounds like a polished old school death metal band, but the deep guttural vocals also give a more modern and brutal feeling to the record.

The combination of these vocals and melodies may sound a little bit weird at times, because the rest of the music is quite tame. Also the extremely polished and obviously structured solos don’t seem to fit the rest of the music during the easy going half-time measures. In general this record is not really that challenging. We probably all have heard something like this before.

As a comeback, Omen of Disease is not bad. It’s basically where they left off in the 90’s. So fans of Broken Hope, check it out! But I don’t think this has anything else to contribute in the death metal scene. It’s too predictable and tame. Nothing new but the decent stuff that has been out there for years.