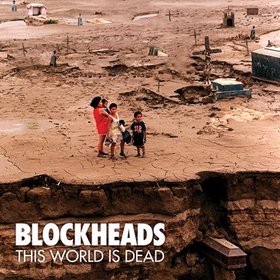 By Wouter
Blockheads are a grindcore band from France. The band exists for over a decade now and are, unlike many other grindcore bands, dead serious about their music. Which you can easily hear by the quality of their songs. This isn’t a composition of mindless blastbeats, one after another. This is talent.

It doesn’t take long before the first blastbeats kicks in though. This is grindcore after all and most of the songs takes over just one minute. But even within such a short time, there are actual song structures. And these song structures are very clear. Mostly because the vocalists pause and change from high pitched screamings to deep growls between the verses. Within this genre it often sounds like a lot of screaming during the entire cd, but not here. The vocalists have a great timing. Besides that, the production is very good. Even during the blastbeats you can hear the guitar riffs. So this is absolutely better than most releases in the genre.

This World Is Dead is highly recommended for grindcore fans in general but especially for fans of Discordance Axis and Benighted. These 24 songs of intense grindcore will kick your ass and the 25th song takes you into a 7 minute doomy trance making you think what the hell just happened. It’s a perfect way to end the cd.