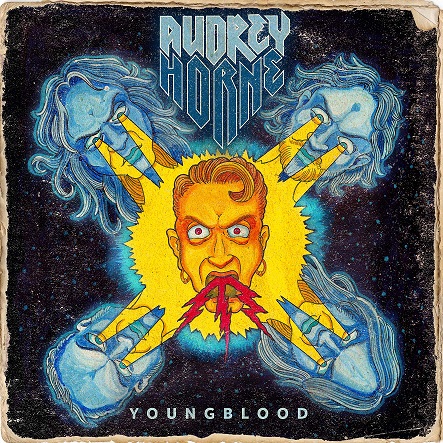 By Laetitia
If any of the characteristics of the persona Audrey Horne (David Lynchs and Mark Frosts female star from the cult show Twin Peaks people) reflect in the music of the band, Youngblood should be smooth, catchy and daring. Now for those unfamiliar with this group: Audrey Horne is a heavy/melodic hard rock band from Norway, featuring members as guitarist Arve Isdal (Enslaved) and guitarist Thomas Tofthagen (Sahg). Because of the other occupations of the musicians, it took the Norwegians three years to produce this third effort. Was it worth the wait? Hell yes.

Even before the first four songs are finished, it’s possible to tick off smooth (‘There Goes A Lady’), catchy (‘Youngblood’) and daring (‘Redemption Blues’, ‘Straight Into Your Grave’). Even ‘Show and Tell,’ initially sounded as nothing out of the ordinary, until halfway through the song the musical interlude adds a lot more dynamic to the song. Pretty much all tracks on Youngblood are great stuff for the ears. So, what exactly makes this record a rock ‘n roll gem? First off, the versatile vocals of Torkjell Rød. It seems to be the perfect fit with the music. Add catchy riffs, hooks, great harmonies, a good balance between the other instruments and excellent varied songwriting from these guys. Fans of Audrey Horne can get this album blindly (maybe even a tip, because the cover isn’t that great). But also rock ‘n roll fans and other music fans who dare to step out of their comfort zone should give it a go.