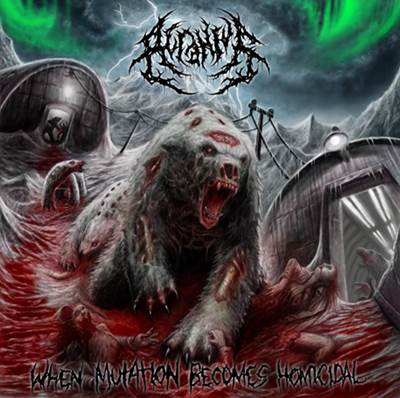 By Wouter
Acranius is a slam death metal band from Germany. They released an EP before called ‘The Echo of Her Cracking Chest’. Now with their new vocalist, they decided to re-record these six songs and do another six new songs to create their first full-length: When Mutation Becomes Homicidal. Expect a high dose of slamming breakdowns and get ready for some baltic sea brutality!

The cd starts with a somewhat easy going intro song. A little bit of the calm before the storm, but they give you a good impression what to expect with the 11 other songs. Which are breakdowns and guttural vocals obviously. The second song ‘Life Sustainment To Continue Mutilation’ is another new song and you might have seen the video as well. And it contains those groovy riffs, just like on the EP. So the style is still very similar. Yet the sound has been approved though. The snare doesn’t have that hollow sound for example. And the guitars sound so much heavier now. You can hear the difference immediatly with the re-recorded songs. So it’s a good thing they re-recorded these songs.

When Mutation Becomes Homicidal is a much more professional effort than the EP. If you disliked the EP because of the production, then you should definatly re-try this one. And for all the slam heads in general, this might be one of the highlights this year. It’s an improvement of their EP and it’s good to hear those songs like this.