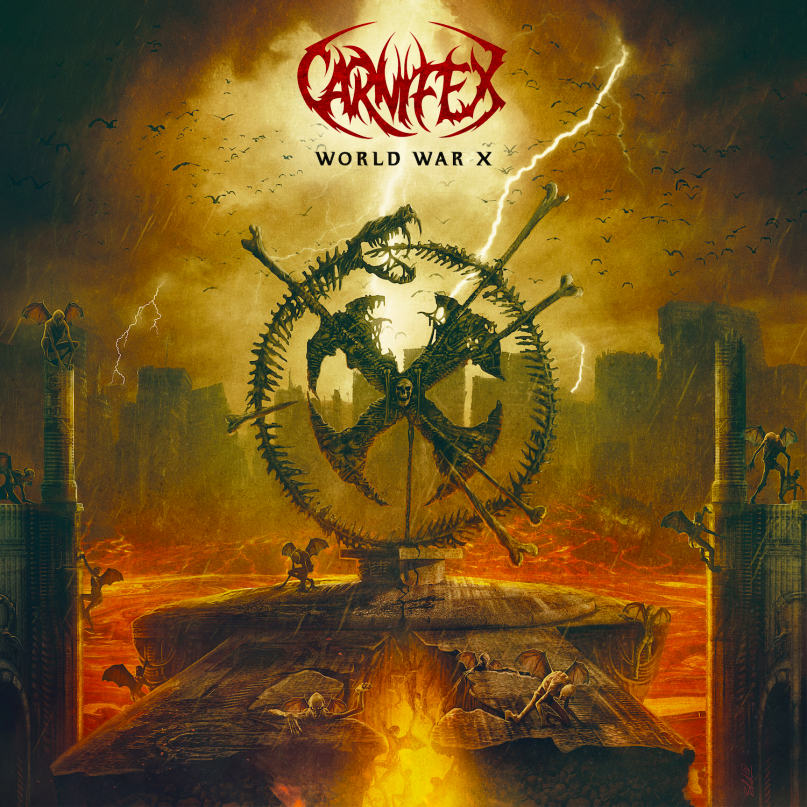 How do you follow up an album as good as Slow Death? You put together its younger sibling and unleash it on the masses. With their seventh studio full length San Diego County California’s Carnifex brings you “World War X” where all roads lead to hell, which is also a song featuring the hugely popular guitarist Angel Vivaldi.

Death to all Humanity! Lewis chants as the opening title track slams through the speakers, immediately setting the tone for what this album is about to deliver, the premeditated end to all humanity through what seems to be global civil war. With a blackened groove they are so well known for World War X is exactly what we expect from Carnifex. Dragging heaven to the depths, Lewis continues to be one of the best chorus creators in all of Heavy Metal. His chanted use of song titles constantly get stuck in your head.

Blending Deathcore and black metal is what Carnifex is known for and there is no shortage of it in the song This Infernal Darkness. Eight string grooves open the track until the chorus lights up the candles and spirals you into some of the blackest metal Deathcore has to offer. Dark melodies sewn together with melodic guitar riffs and massive sounding pianos World War X brings you everything you love about Carnifex.

With grooves that keep your head banging and the catchiest of choruses World War X is an absolute must have for everyone that enjoys extreme music. Carnifex constantly offers a blend of music that a fan of any extreme metal can enjoy. Not to mention they added a couple of huge features on this album with arguably metals best front woman Arch Enemy’s own Alissa White-Gluz, in the track “No Light Shall Save Us” she offers what seems to have been lost since her time in The Agonist, her captivating clean singing. The second feature is Masterwork guitarist Angel Vivald as mentioned previously in “All Roads Lead to Hell”, where he offers pounding grooves before he peels off the frets off his guitar with a monstrous lead to end the track.

Growing up with Carnifex it has been such an enjoyable experience watching them flourish from what was the typical Deathcore movement into a staple of the genre. Being a guitarist myself the work on this album is exactly what everyone loved in their 2016 flagship release of “Slow Death” The rhythm work is like a journey through all of metals darkest, most punishing corners. Cory Arford and Jordan Lockery seem to be Brushed by the Wings of Demons with beautiful clean masterpieces elegantly leading into soaring leads followed by colossal breakdowns. Carnifex knows what they are and what the listener wants, and they don’t shy away from it.

There isn’t a lot about this album I can pick out as being “disappointing”. A few songs creep towards 5 minutes of run time but they’re mixed in well with shorter 3 minute counter parts. Though if I have to choose one thing that I did notice about my second listen through is that the mix in my opinion isn’t quite as pronounced and crisp as “Slow Death”. The “middle” part of the mix seems to be a touch lower than previous releases.
All in all “World War X” is exactly what listeners love about Carnifex. Like I mentioned earlier if you’re into extreme music with massive breakdowns, endless musical grooves and transitions this album is a must have for your collection.