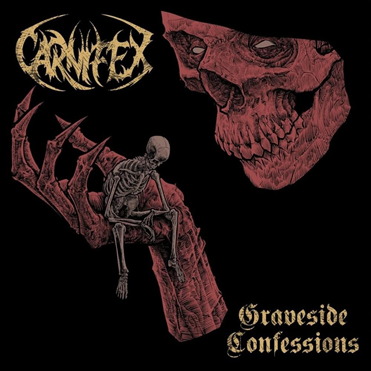 Any metalhead who’s into deathcore knows Carnifex, at least by name. One of the seminal bands of the genre, they revel in heavy breakdowns and dark lyrical content, frequently thematically centered around depression and suicide. This Friday they continue in character with a (mostly) heavy-as-fuck new album, “Graveside Confessions”, and it’s chock-full of nostalgia – which makes sense in light of the fact that, according an interview that Scott Lewis (vocals) recently did with The Pit, this might be Carnifex’s last album. And you can feel the desperation and nihilism in the music.

They open with the pre-released title track, and it’s a complete banger, with a thick texture and rolling breakdowns augmented by the occasional melodic instrumental line. We get a few seconds of organ which a nice touch of goth aesthetic, darkening the atmosphere fantastically. I just wish there were more moments like that one.

Next comes “Seven Souls”, which I can only assume must be the offering that Scott Lewis had to sacrifice to the gods of heavy metal to pull off such enunciative vocals in that song. In any case, it’ll definitely start some mosh pits, and there are some particularly delightful sections of 6/8 time which carry the momentum through the work.

“Cursed” was the first throwback: it’s a single which was out last year as a so-called “Isolation mix” – which Axl Rosenberg from MetalSucks (correctly) interprets as “a euphemism for ‘very roughly mixed’. Unless I’m going totally crazy, they seem to have re-mixed it for the album, and it has a much richer and more dramatic texture than the original. Don’t get me wrong, both versions go hard and heavy, and the rough mixture of the original does have a particular deathcore-esque charm- but the nuance to the timbre of this version is deeper, overwhelming the listener with the atmosphere in lieu of the cutting effect.

January Nights provides the stark contrast from the ripping savagery of the openers – It’s completely instrumental, and I wish I could hear it with real string instruments instead of the synth-y electronic ones in the opening, though perhaps that’s just my pretentious classical cello background showing its bias.

Countess of Perpetual Night is reminiscent in name and aesthetic of “Countess of the Crescent Moon” from Carnifex’s 2016 album “Slow Death”, and my personal favourite of the album. It features plenty of breakdowns and blast beats, but they don’t overdo it, tempering the dark gutterals with semi-melodic instrumental troping and some of the most effective half-tempo repetitions I’ve heard from them (well, maybe not exactly half, I didn’t check, but they pull off the “same-phrase-repeated-slower” technique with epic style).

Cold Dead Summer seems like it might take inspiration from “Dark Days” from their 2014 album “Die Without Hope”, and also vaguely reminds me of Thy Art is Murder in terms of colour. I enjoyed the time signature changes, particularly the parts in 6/8, here as well – and it has the thickest texture of the album. Lack of cohesion is my only criticism: all of the parts are great, but the final product feels more like a summation of excellent parts than a unified work.

Alive for the Last Time is short and sweet, with some serious groove right from the beginning – not that I’d compare it at all to the subgenre Groove Metal though; from start to finish, Graveside Confessions is some of the purest deathcore I’ve heard.

The album finishes out with re-releases of three of Carnifex’s previous hits: Collaborating Like Killers, My Heart in Atrophy, and Slit Wrist Savior. Like “Cursed”, the mix in these three seems to be a bit darker, richer, and more symphonic than the originals – like changing the colour from steel grey to a rich black. It really drives home the goth aspects of the band.

Lyrically speaking Carnifex stays in character with the dark and depressive themes, as they’ve promised to us on social media throughout the years. They’ve clearly poured a lot of their souls into this one, and its bleak, nothing-left-to-lose thematic content cuts deep: it’s definitely one of those albums that you can headbang to on a surface level, but also really sit down and feel.