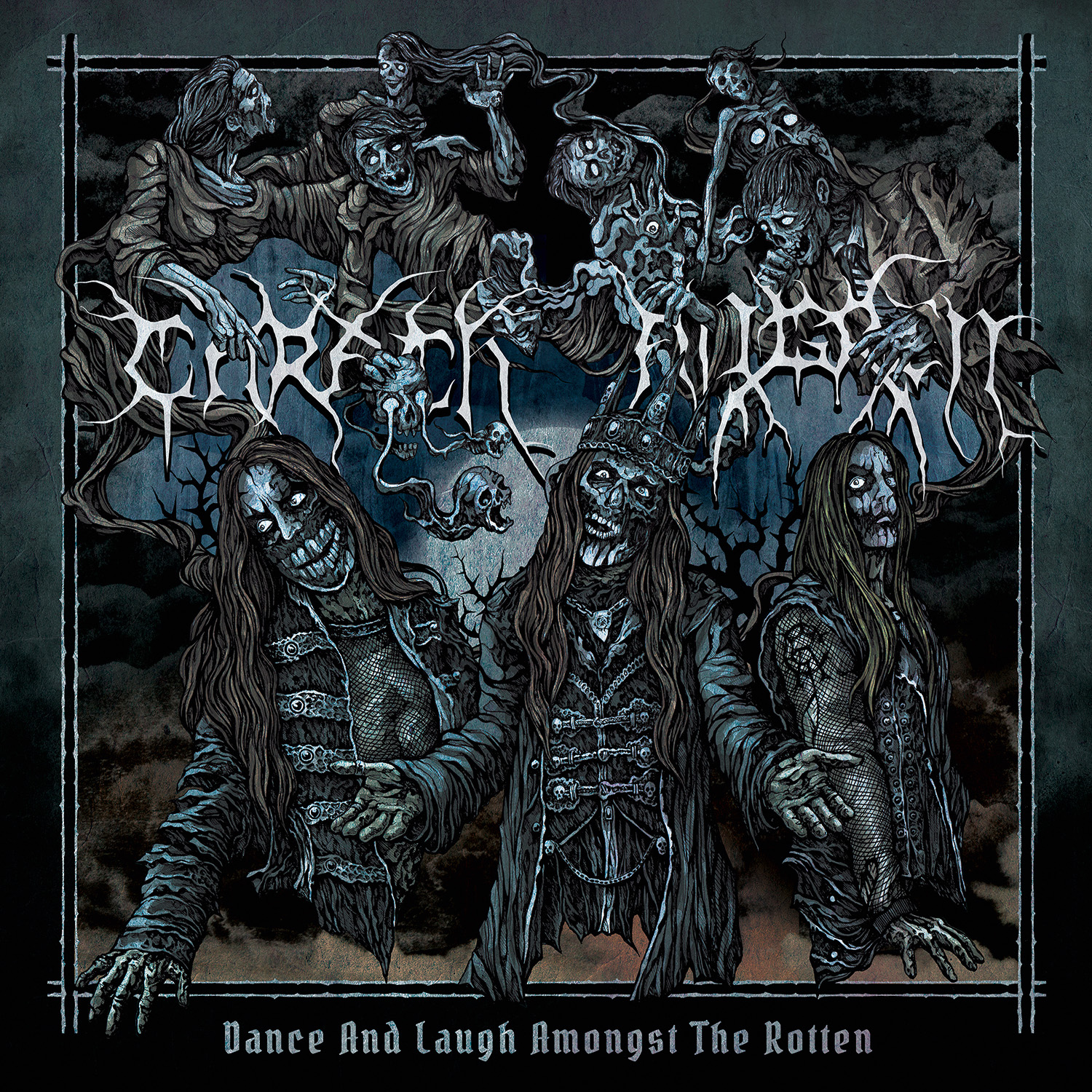 ‘Is there a presence among us’? Yes, oui. It is the presence of the Dutch horror metallers Carach Angren, who have returned from the other realm with their their new haunting effort: Dance and Laugh Amongst The Rotten, to be released by Season Of Mist on June 16th, 2017.

Unlike ‘This Is No Fairytale‘, ‘Lammendam’ and ‘Death Came Through A Phantom Ship’, ‘Dance and Laugh Amongst The Rotten’ is not a full fledged concept album but more similar to ‘Where the Corpses Sink Forever’. It comprises several stories of hauntings and possessions, forged together by the story of a girl playing with an Ouija board.

Having already been present at the listening session of the new record, yours truly already knew a little what to expect from Dance and Laugh Amongst The Rotten. Of course, a first impression only tells you this much, so it was time to get a better feel of Carach Angren’s newest effort. While the band’s overall style hasn’t changed profoundly, there are some new dimensions noticeable in the Limburgians’ fifth studio record.

During the listening session, vocalist Seregor already admitted that it was the band’s intention to go for a sound that would immediately grab the attention of the audience. In a way, Carach Angren has managed to broaden their musical scope, without toning down the heavyness. This is especially noticable in the overall groovier, more modern sound of the guitars. ‘Pitch Black Box’, for example is, if anything, a call for headbanging to the mechanic riffs.

Both ‘Charles Francis Coghlan’ and ‘Song For The Dead’ demonstrate the mastery of composer and key board player Ardek and whose cinematic influence seems to increase with each album. With the first (‘Charles Francis Coghlan‘) being an intricate masterpiece (and one of the highlights of the record) and the latter (‘Song For The Dead’) reconfirming the band’s intense theatrical style: the combination of storytelling and macabre soundscape make it a playful song. Yet there is one thing that disturbs yours truly about this song: the over (over) repetitive chorus, almost seemingly uninspired (and yet it is such an ear worm that you find yourself humming along regardless). After a majestic track such as ‘Charles Francis Coghlan‘, parts of ‘Song For The Dead‘ comes off a bit bleak.

As stated above, Carach Angren hasn’t gone soft. Far from it actually. Both ‘De Naam Van De Duivel‘ and ‘The Possession Process’ remind of older Carach Angren songs, with an unadulterated malice and increasingly cinematic, dominant symphonies that are alike Septicflesh on ‘The Possession Process’. Or the venomous lyrics on ‘Charlie‘, (“Bitch, slut, whore, cunt.” Go fuck your god, fuck your god!” – “D-I-E” spelled out repeatedly”) and the always impressive, relentless drums of Namtar.

With Dance and Laugh Amongst The Rotten, the Dutch band has pushed their theatrical style to a new high without losing their extreme metal edge, establishing themselves (again) as one of the top (mainstream) metal acts our country has to offer.