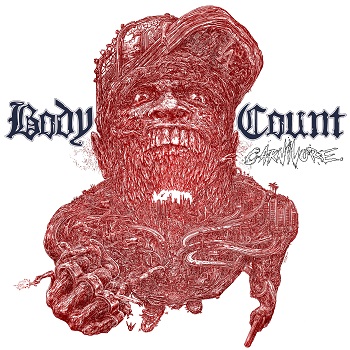 Formed in Los Angeles California in 1990, Ice T took his legacy from the streets of the rap scene and formed the iconic thrash metal project Body Count. Taking heavy influence from the gods of thrash themselves in Slayer there’s so much to love musically. In early March of 2020 they released their seventh studio album titled “Carnivore”. With monster features including the incredible Amy Lee (Evanescence) and the king of hardcore himself Jamey Jasta (Hatebreed, Jasta) along with an appearance from Riley Gale of the hottest thrash band around in Power Trip Carnivore pounds your ears from start to finish with their mix of old school thrash and new school core.

The album opens with its title track “Carnivore” as it eerily builds through the first minute of the song and comes crashing in like the off spring of Thy Art is murder. Heavy crushing grooves pierce the speakers as Ice T yells CARNIVORE! This song harnesses everything we love about moshing and metal. Power, and the release of emotion.

The third song of the album is titled “Bum-Rush”. I really dig the opening intro into the chorus, it has a very old school punk-beastie boys sort of feel and it really gets you moving and head banging. After the chorus they jump into a bridge section where they chant “body count” I REALLY like the music behind it. The melody of the guitars is really catchy and perfectly arranged with their harmonies.

Next is where body count really shines. Every album they produce they put a tribute song on, None more fitting for this album than the Ace of Spades since we unfortunately lost Lemmy in 2015. Following their tribute you have the second feature of the album titled “Another Level” featuring Jamey Jasta. In my opinion this is one of the best songs on the album from intro to end. The acoustic intro into the pre chorus build up is strong, and the chorus is very anthem oriented and memorable.

I wanted to save my favorite track for last. The eighth song on the album features the Incredible Amy Lee. Without a doubt this song is the star of the album. Musically, lyrically, and the performance is absolutely perfect. It really reminisces what makes Evanescence so great with Amy, Ice T really brings out the style that Ben Moody used to echo behind her during their songs. I absolutely love the bridge and chorus sections with her singing. The best part of the song though is the message. Tell everyone that you truly care about them because tomorrow isn’t guaranteed and waiting to be real with the ones you love, isn’t always promised. So don’t.

In closing, I’m sure you noticed that I haven’t spoken much on the vocal performance. Honestly, I don’t care for the lyrics or the message behind them. I just feel he doesn’t fit the project and if it were fronted by a true metal vocalist that this group could be a top tier metal outfit. However, the glory of our genre is that with each project it is a platform for them to project their beliefs and feelings. I can’t not respect that.