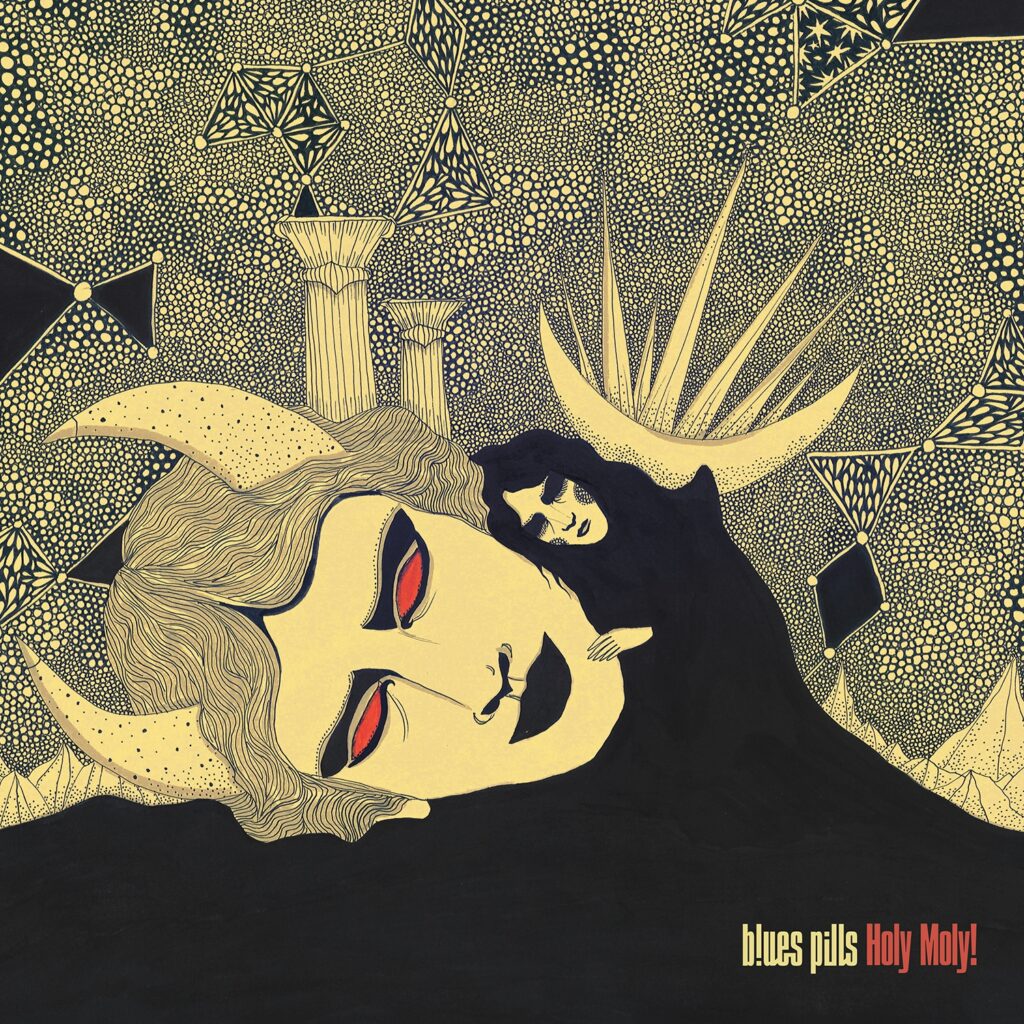 Friday, the 21st of august, the Blues Rock formation Blues Pills released their third studio album titled „Holy Moly!“. It was supposed to be released in June, but you know, Corona.. So the Blues Pills fans had to be patient for another two months. But let me tell you this: It was worth the wait!

Since their last album there were some line-up changes in this 2011 blues rock formation. Guitarist Dorian Sorriaux left and bass player Zach Anderson was taking over his job. To fill up the bass playing void, Kistoffer Schander joined last year. So, a bit of a change, and now we can find out if the Blues Pills music still delivers. The striking artwork is promising to begin with.

The opening track „Proud Woman“ starts with a recording of a female protester: “(…) equal rights to have a job, to not be treated like a piece of meat (…)” If you were thinking this was a recent recording, think again – it’s from a women’s protest march in the seventies… Anyhow, as a feminist, I loved this intro. Many artists would hesitate to put something like that at the very start of the album, as it can put some of the listeners off. Feminism is still a dirty word after all.. So I applaud Blues Pills’ courage! After a declaration “I’m a proud woman” singer Elin Larsson straightaway blows the listener away with her powerful voice. “Proud Woman” is a catchy song and the perfect start for this album. To me, this is what feminism sound like. Her strong voice and the groovy guitars combined with the powerful no-nonsense lyrics just makes me want to declare „You go, girl!“throughout the whole first track.

This energy is continued throughout the album – the next track “Low Road” is a fast and uncompromising song in which Elin demonstrates her vocal qualities in full. “Dreaming my life away” is a bit heavier with more focus on the guitars and some interesting drum parts. After this burst of energy, it’s time to slow down a bit for some more blues and a bit less rock in the song “California”. This is where the music reminds me of Beth Hart and Joe Bonamassa, which should be a big compliment. “Rhythm in the Blood” takes the beat up a notch again, before calming down with “Dust”, a beautiful soulful track. I thought the next song “Kiss my past goodbye” was not so strong, it seemed a bit uncoordinated or maybe like something that was thrown together in a short time, although it seemed guitarist Zach and drum player André Kvarnström had their fair share of fun. A bit of balm for the soul is offered by the soulful song “Wish I’d Known”. It makes for a welcome break before it continues with the heavy Bye Bye Birdie. After the calm “Song from a Mourning Dove”, Blues Pills end their album Holy Moly! with a song about depression: “Longest lasting friend”. After all, they have to put the Blues in the Blues Pills, and even a Proud Woman can have her weaknesses, right?

This album however, has only very few. Holy Moly! shows energy, talent and feeling in a very attractive package and I can only recommend everyone to listen in, whether you’re already familiar with Blues Pills or not.