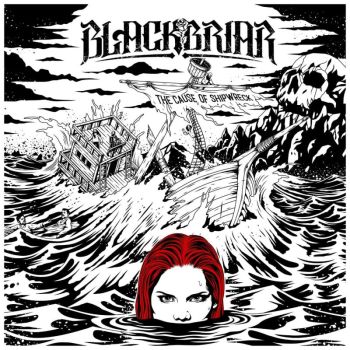 For the last couple of years, Blackbriar has been working hard to build their brand. After a couple of EP’s and singles, as well as supporting bands like Epica, Delain and Halestorm, it was about time for an official debut album. And what a debut it is, as I can immediately say that “The Cause of Shipwreck” does not disappoint.

What’s really special about the release of this record, is that it’s completely backed by the fans. Blackbriar likes to keep things into their own hands and wanted to release a record independently. Thus, within twenty-four hours their goal was reached and in the end a total of over €70.000 was funded, reaching all stretch goals. This resulted in the birth of “The Cause of Shipwreck”.

With the help of the well-known producer Joost van den Broek, whom Blackbriar have worked with before, a ten-track score has made its way to its final form. In their EP’s we were introduced into the magical world of beautifully grim tales of witches, banshees, and sea sirens. This style of storytelling through lyrics and great musical arrangements continues in this debut record.

The first two songs sound like a back-to-back story in which we first hear the side of the accusation and then the accused. In “Through the Crevice” we get some top-notch alternative/gothic metal with several layers, a nice guitar solo and a catchy chorus. “The Séance” has this eerie, witchy vibe throughout the whole song. A huge compliment can be made to lead zinger Zora, who does wonders with bringing just the right way of singing to emphasize this whole atmosphere.
This vibe continues in “You’re Haunting Me”, which is a slow ballad style song, but not the lovey-dovey kind. Again, Zora’s singing here is just mesmerizing and captivating. But after this slow song, we get pulled back into some heavy metal with “Walking Over My Grave” which kind of gives me Stream of Passion throwbacks right in the beginning regarding the instrumental part.

The next track, “My Down-to-Earth Lover” is just a miss to me. Where before the music and lyrics really matched, somehow here it just seems off. After this, we get treated to a great folklore story about a Selkie in the song with the same name. Some parts of this song reminded me of Cellar Darling and I really love the mixture of the riffs and keys here. Some parts of the song seem kind of folky regarding the singing, but also progressive regarding the guitar riffs. Cellar Darling vibes continue in “Deadly Diminuendo” and these two tracks are my favorites of the record.
Last song of “The Cause of Shipwreck” is “Lilith Be Gone” and it’s a worthy ending so a great record. Every song is its own short story in which you can lose yourself. I foresee a bright future for Blackbriar and if this is “just” their debut album, I’m curious to see what path will unfold for this band from the Dutch town of Assen.

Tracklist:
1. Confess
2. Weakness and Lust
3. Through the Crevice
4. The Séance
5. You’re Haunting Me
6. Walking Over My Grave
7. My Down-to-Earth Lover
8. Selkie
9. Deadly Diminuendo
10. Lilith Be Gone