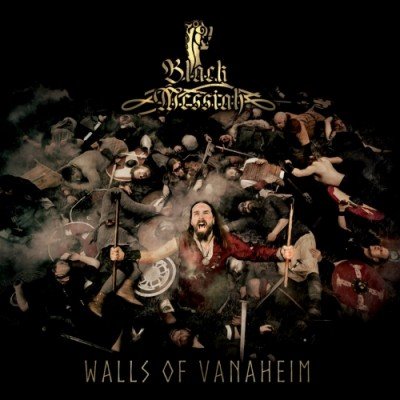 With a career starting in the early nineties, German folk/pagan metal band Black Messiah can be seen as a part of one of the ‘older generation’ the genre. Any fan of the genre probably knows at least the live ‘hit’ songs ‘Irminsul‘ and ‘Sauflied‘. The band’s masterpiece however, is the record First War Of The World (2009), a perfect mixture between epic storytelling (‘Andacht‘), catchy folk songs (‘Gullveig‘, ‘Söldnerschwein‘) and metal songs (‘Burn Vanaheimr‘).

As Black Messiah manages to stay under the radar everywhere except in their native Germany, it wasn’t until a couple of weeks ago that yours truly learned about the successor to the aforementioned album (and the records in between, The Final Journey and Heimweh), in the form of the new record Walls Of Vanaheim, released June 30th, this year. On the one hand learning about this follow-up was a pleasant surprise, having thoroughly enjoyed First War Of The World. On the other hand, one can only hope that the second will be as good as the first, without it suffering from the one-trick-pony-syndrom.

Black Messiah – Walls Of Vanaheim picks up after the first war between the two Norse pantheons, the Aesir and Vanir, in a time of peace. The age of peace will be shattered when Odin finds the severed head of his giant friend Mimir. A bit more than on First War Of The World, Walls Of Vanaheim (WoV) employs the spoken interludes giving the record more of an audio book. Especially if you count the spinning time of 72 minutes. Given the fact that yours truly spends most of her time on the road, listening to such a story goes well with gazing out to the green, Dutch pastures outside (ahem). Ok, goes great with losing yourself in a daydream or two. Yet this is not suitable for everyone and admittedly, sometimes the flow of WoV is disturbed by the spoken parts. Also, while not disturbing, the choice to include English for the interludes on a predominantly German record seems strange. It shouldn’t be a problem when you understand both languages, but it is more likely that most fans will only speak one of the two.

Musically, the record logically continues the style of the First War Of The World. ‘Mime’s Tod‘, is an upbeat, folk metal song with the violin taking the lead. ‘Die Bürde des Njörd‘, is catchy and more powerful and together with tracks such as ‘The Walls Of Vanaheim‘ and ‘Kvasir‘, represent the heavier, darker side of Black Messiah, not shying away from black/thrash metal elements. The one thing that WoV lacks is an old fashioned Sauflied, like ‘Sauflied‘ and ‘Söldnerschwein‘. The production is similar to other Black Messiah albums, a bit too flat and the symphonic elements sometimes too cheesy in order to sound heroic (f.e. the intro on ‘Mimir’s Head’).

Overall, Walls Of Vanaheim is a good, if typical Black Messiah album. It didn’t directly grab me as much as First War Of The World, but given that I’ve listened to the first a couple of hundred times and the second one only about ten, that might be due a distorted perspective. It’s a safe bet for any folk metal and especially if you enjoy the previous work of the band.