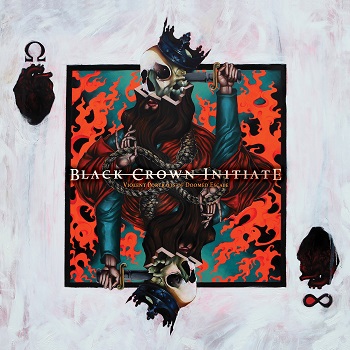 Black Crown Initiate is a band that caught my immediate attention in …2015 give or take. I was simply working around my house with some ear buds in jamming some Pandora, on my Beyond Creation station. I was hit with some beautiful melodies and heavy verses, I instantly looked at my telephone with great curiosity to the orgasm inducing music blaring in my ears. It read “Black Crown Initiate-Selves We Connot Forget” I’ve been a fan ever since.

Fast forward to August 7th 2020 Via Century Media Records. Black Crown Initiate gives us “Violent Portraits of Doomed Escape”, and it doesn’t disappoint. The album starts off with the song “Invitation”, Welcomed by some clean vocals and acoustic work from guitarist and clean vocalist Andy Thomas. This song beautifully shows off what the band is capable of. Between the heavy verses and wonderful choruses, Heavy and Clean vocals and acoustics is what makes Black Crown Initiate stand out amongst similar bands.

The album has something that caught me off guard though, and that’s the track “Bellow”. I’m not even sure why it’s there, or what it is really. Maybe, Guttural vocalist James Dorton was doing some vocal warm ups in the studio and they decided to throw on some reverb and make it sound like a tribal sacrifice? Who knows? It’s not bad, just threw me completely off. It doesn’t really fit with the album. BUT, that’s artistic expression, because it does give you a break from all the technical chaos going on before and resets the palette. It’s just a weird way of doing that, I think.

I’ll give this album a 7 out of 10. It’s a great album but it does get a little monotonous at times.
Record label: Century Media Records
Review by: Bill