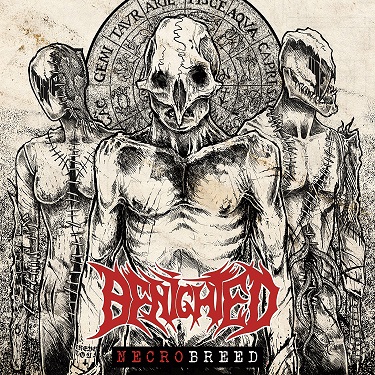 By Laetitia
The French deathgrind band Benighted is one of the household names in their scene, yet has always stayed under the radar with the metal masses. The Frenchies previous album, Carnivore Sublime, was either deemed to polished and technical by some or lauded by others for exactly those reasons. With their 8th studio effort, Necrobreed (released by Season of Mist on February 17th) the band returns a bit more to its roots and release another ear-splitting record.

The record opens with the intro ‘Hush Little Baby‘. Anyone who is familiar with Benighted knows that this sweet tune of a mother singing to her child is a harbinger for chaos, destruction and gore. ‘Reptilian‘ is the embodiment exactly that. The jigsaw riffs and the insane blast beats (by ex-Necrophagist drummer Romain Goulon) plunge the listener into a whirlwind of lunacy. ‘Fun fact’: ”vocalist (and caretaker in a mental asylum) Julien Truchan penned lyrics dealing with a man, who is stitching dead animals to his abdomen. On feeling the warmth of his infected flesh, the schizophrenic “gives birth” to the carcass and places it in his house as the result of a severe childhood trauma involving a dead cat.”

That same Julien Truchan gives a top notch performance on Necrobreed. From deep, brutal guttural vocals, to agonizing screams and sickening the pig squeals are impressive, proving Truchan to be extremely versatile. ‘Forgive Me Father,’ features the vocals of Trevor Strnad of The Black Dahlia Murder, whose voice combines nicely with Truchan’s on this blood splattering duet. It’s not just the vocal lines that blow you away, but also the sheer force of the drums (top sport), the diversity in riffage and the occasional shrieking solo (for example on ‘Psychosilencer‘) are no less massive.

Is there a weakness on this record? Depends on how you look at it. The sound of Benighted hasn’t changed much on this latest effort and I don’t expect that will happen, period. That said, Necrobreed is perfect in its genre: ruthless, crushing, deranged and filled with gore. So if you’re looking for some utterly devastating music (take precautions for the slamming side effects), this is an album for you. Also, be sure to catch the Frenchies on tour in April!