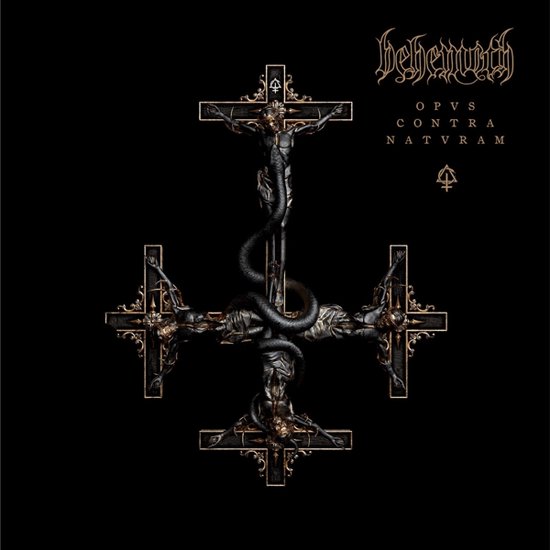 Behemoth has shown constant growth since its birth in the beginning of the nineties. They stopped being a pure black metal act with “Demonic Incantations” (1998). Follow up “Satanica” (1999) was their first spawn which contained a blackened death metal approach. Their founder Nergal has always been a musician who gives absolute attention to detail and is the main force behind the creative process. In the last years this band has gained and gained popularity and cannot be regarded as an underground band anymore.  Although I have my reservations about the products Behemoth offers to anyone who is willing to buy it, it has never polluted the sheer quality of music they have released over the years. And that is something I admire.

As I said, throughout the years Behemoth became infamous with its highly skilled, technical, yet dark blackened death metal where satanic grandeur reigned (and offended the Church as well).

It has become one of the most popular extreme metal acts around the globe. And with highly acclaimed albums such as “The Satanist” (2014) and “I Loved You at Your Darkest” (2018) they managed to set the bar high. During the Covid pandemic Nergal has been busy creating and perfecting their newest album “Opvs Contra Natvram.” It took me quite a few spins since the complexity of the album needed some time to digest it all. The big question is: does their newest spawn reach or even surpass the quality of their previous albums?

I am sorry to report this to you, but the answer is simply: no. Although “Opvs Contra Natvram” still contains their unique traits and craftsmanship, namely highly complex, extreme and dark blackened death metal, there are just too many unfinished ideas on this album. Also the many solos are a pain in my ear distracting me from the song structures of the song itself.  But overall it is the lack of chemistry I have with this album. It just feels as if Behemoth made a copy paste of their previous “hit” albums and molded it into this new piece of work. I think a lot of you will disagree on this matter but this is the way I look at this album.

But all negative points aside: a lesser Behemoth album still isn’t a bad album. This is because Nergal and his comrades can still make it intriguing enough with some very good tracks and great attention to detail. There’s enough to discover on this album. And I must admit: the production is superb.  Baressi (Tool) recorded and mixed the whole album creating a powerful, clear, yet harsh sound. It is less bombastic than their previous two albums yet fits their discography well.

Intro “Post-God Nirvana” starts theatrically with heavy tribal drums and ominous chants and sets the gate wide upon for “Malaria Vvlgata” to kick in. This track is frantic, hectic, and hellish and is just a little too chaotic for my taste. Luckily, “The Deathless Sun” has a more majestic character with its beautiful yet haunted choir. “Ov My Herculean Exile” is a trademark Behemoth song and has all the unique elements which make this band so great yet it simply doesn’t stick to my soul.

“Neo-Spartacus” is fierce, contains excellent (bass) riffs and has a tuned down mid-tempo part with plenty of variety while “Off To War!” has a great interlude, is catchy as it is fast and has  loads of detail. Together with “Neo-Spartacvs” and the last track on this album these songs make this album worthwhile. With “Once Upon A Pale Horse” I find myself struggling to keep concentrated on the album. “Thy Becoming Eternal” on the other hand has more sense of urgency with its exalted character and beautiful choir. Unfortunately, the great atmosphere presented on this track is sometimes killed by the spoken word section of Nergal.Luckily, “Versvs Christvs” is a great closing track checking all the boxes which makes Behemoth such a great band.

This isn’t, in my humble opinion, the best album of Poland’s greatest metal band ever. Doesn’t mean that “Opvs Contra Natvram” is a bad album either. It just doesn’t exceed the expectations created with their previous two albums.

Maybe this album is just like good wine. It ripens with age – who knows. And I am sure that quite a few songs like “Off To War!” should be great during their thrilling live shows. And this is where I like Behemoth best. On the stage wreaking havoc with a tight yet scripted performance with great attention to detail and theatrics but not forgetting the extreme nature of their music. At this moment they are touring with Arch Enemy and Carcass. Go see them if you have the chance!