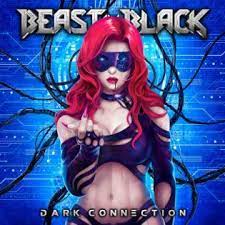 This week, Finnish power metal band Beast in Black continues with its long-standing themes by releasing a cyber-punk themed album called “Dark Connection”. Since former Battle Beast guitarist Anton Kabanen started the band, Beast in Black has often referenced anime tropes – in particular, many songs have been themed off Berserk, and is actually the reason I’ve seen that anime at all – and this new album is no exception. In fact, according to a recent Blabbermouth interview with Kabanen this new album is dedicated to Berserk’s creator Kentaro Miura, in light of his passing.

I can definitely see the rationale for pre-releasing “Moonlight Rendezvous”, since it’s pretty representative of the rest of the album: “Dark Connection” carries very consistently the thematic content of a romance between the “Beast” and the femme fatale. At times I could actually hear the “cyberpunk” theme in a heavier-than-normal (even for Beast in Black) usage of synth, but this could easily be an effect exclusive to the ear of the beholder.

Other notable tracks include “Hardcore”, which has some effective usage of Jazz tropes including a rhythmic swing and chromaticism which had me waiting for the ii-V-I progression, and “Dark New World”, where the snare in the beginning made me think of the Battle Beast track “Touch in the Night” . As a side note, aesthetically speaking Beast in Black and Battle Beast continue to be the exact same band, in my opinion, which makes me wonder if the fact that Battle Beast also dropped a new track this month is a coincidence. Aside from that, “Revengeance Machine” is a particularly hard-hitting banger which features some powerful lyrical choices, including a few lines in the opening that, as an AI researcher by day, I have to admit I particularly agree with.

One trope that I didn’t hear so much of on this new album was the stark contrast between lyrical content and musical aesthetic that we’ve heard from Beast in Black in the past: for example, in the title track of “From Hell with Love”, where you have some of the most upbeat music I’ve ever heard, coupled with the lyrics, “Another voiceless cry / Another hopeless try / …. /’Cause to my heart, soul and mind, you are Kryptonite”. It’s an interesting and enjoyable technique that mirrors the conversational phenomenon of joking about one’s trauma, but I didn’t hear so much of it on the new album: on “Dark Connection”, the aesthetic flavour parallels the lyrics more instead of contrasting with them – take, for example, the triumphant “Broken Survivors”, which almost made me wish I was in love with someone, and the slower reflectiveness of “My Dystopia” (don’t get me wrong, though, my comment is meant to be observational rather than critical).

Overall it’s a good album, thematically consistent with the rest of Beast in Black’s work, but takes itself more seriously than its predecessor.