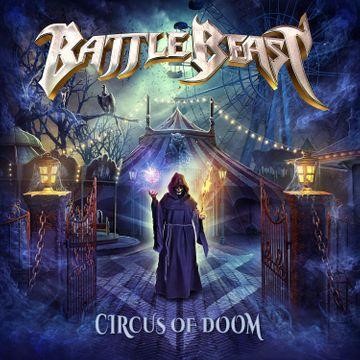 I was first introduced to Battle Beast when they opened for Kamelot in 2018 and was instantly won over. With success among the ranks highlighted by their 2014 nomination for best Finnish metal album, Battle Beast is a well-established gothic power metal band named after a character from the comic book series Invincible. They’re known for their upbeat, catchy melodies coupled with dark dramatic lyrics, and they also sport a host of interesting story-driven music videos.

This week Battle Beast is set to release its sixth full album, “Circus of Doom,” and it includes some of their richest, most symphonic work to date. The album art is a definite highlight – not only is it hauntingly dramatic and cool as fuck, but thanks to my synesthesia I can also say it matches the colour palette of the music very precisely.

The album opens with the title track, which is also one of my personal favorites. Featuring a powerful, expansive symphonic background complemented by eerie circus-themed sound effects and more than a little chromaticism, it definitely feels like a ride on a haunted carousel. It’s big music – dealing more bludgeoning than slashing damage, to use a D&D-themed metaphor. The second track, “Wings of Light,” by contrast, takes us back to classic Battle Beast, with its sharper, less expansive chugging drive.

The next three tracks, “Master of Illusion,” “Where Angels Fear to Fly,” and “Eye of the Storm,” were all pre-released with associated music videos. In a continuation of Battle Beast trend, they’re all compellingly dark, leaving the viewer wondering what the whole story is. The music videos also showcase frontwoman Noora Louhimo’s impressive multipotentiality: fronting a band takes a level of acting capability (in addition to musicianship of course), and Louhimo is particularly excellent at it.

The next track, “Russian Roulette,” is a complete banger, with a more synthy-pop timbre and heavily featuring the keyboard. The chromatic scales bring us back to the circus theme, and there’s also a compelling usage of harmony that almost gives it a jazzy feel. The song has absolutely no chill, carrying an amazing level of energy from start to finish.

“Russian Roulette” is followed by “Freedom,” whose large symphonic intro takes us a step back from the moshpit. Whereas the final three songs, “The Road to Avalon” and “The Place Where We Call Home” are more closely reminiscent of the title track’s symphonic texture, while “Armageddon” has a more pointed sound that reminds me more closely of Battle Beast’s early work.

Throughout the album Battle Beast’s classic lyrical flare burns brightly, their gothic poeticism contrasted by the catchy, danceable musical backdrop. It’s great music, although it doesn’t stray very far from their previous work, and a lot of it does sound similar. In any case, I definitely hope I can catch them again on their next American tour.