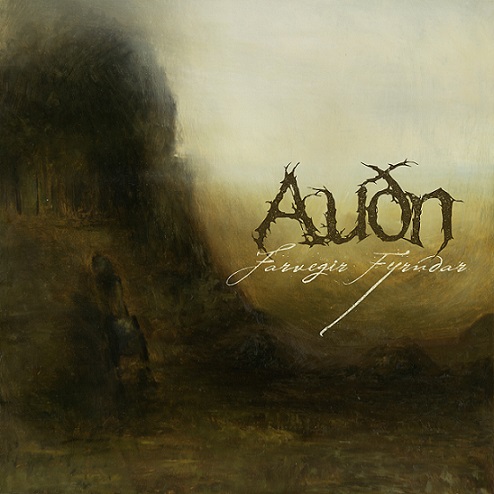 If Iceland is known for one thing – besides beautifully bleak landscapes and its residents’ healthy hankering for fermented shark meat – it’s unique music. From Björk to Sigur Rós and from Sólstafir to Skálmöld, many Icelandic bands have an unmistakable auditory trademark that jumps right out at you on first listen. That’s not to imply that there’s some sort of common “Icelandic sound” – every band from the island sounds completely different, of course, but it’s precisely that distinctiveness that unites them.

That being said, if you’d handed me Icelandic atmospheric black metal band Auðn’s self-titled debut album from 2014 to review, I’m not sure I would’ve been able to pin down anything particularly unique about it. It’s a solid album, no doubt; straightforward, in-your-face black metal performed with passion, skill, and a hint of the macabre. I gave it a few satisfactory spins before finally picking up the band’s sophomore effort, Farvegir Fyrndar, a few weeks ago – and from the very first thundering drumbeats of that album’s opening track, “Veröld Hulin,” I knew I had a game-changer on my hands. This is the sort of music you can feel in your bones and the back corners of your mind, as expansive as a creeping mist, with the explosive force of a storm.

On Farvegir Fyrndar, the differences to the band’s debut are subtle, but somehow all the more significant for that subtlety – slight tweaks to the style and song structures have propelled the music forward by leaps and bounds. While their self-titled release was largely a pummeler, they’ve slowed the tempo in more places here to give the music room to breathe, and conversely, that change has made their sound that much more intense. The melodies are wonderfully haunting, and most tracks have a hook that will stick with you after just a few plays. It’s difficult to pick a standout, as the whole album forms such a well-rounded whole. But “Í Hálmstráið Held,” “Veröld Hulin,” and “Skuggar” were the songs selected as singles, and they were excellent choices; they each reflect different aspects of what Auðn are bringing to the table with this effort – from languorous, dreamy melancholy to fierce shredding. The eardrum-scouring screams (all in the band’s native Icelandic language) are layered over fuzzed-out, trebly guitars to create an atmosphere that immediately transports you to somewhere foggy and cold, a world of gray-green open spaces and a delicious uncertainty about what’s just beyond the next rise – is it a warm hearth, or the encroaching darkness of night?

The journey is the important thing here. Auðn might not be revolutionizing black metal with Farvegir Fyrndar – there are certain riffs and vibes on the album that will feel familiar, loud and clear echoes of the band’s own inspirations – but they are well on their way to becoming another unique jewel in Iceland’s musical crown.