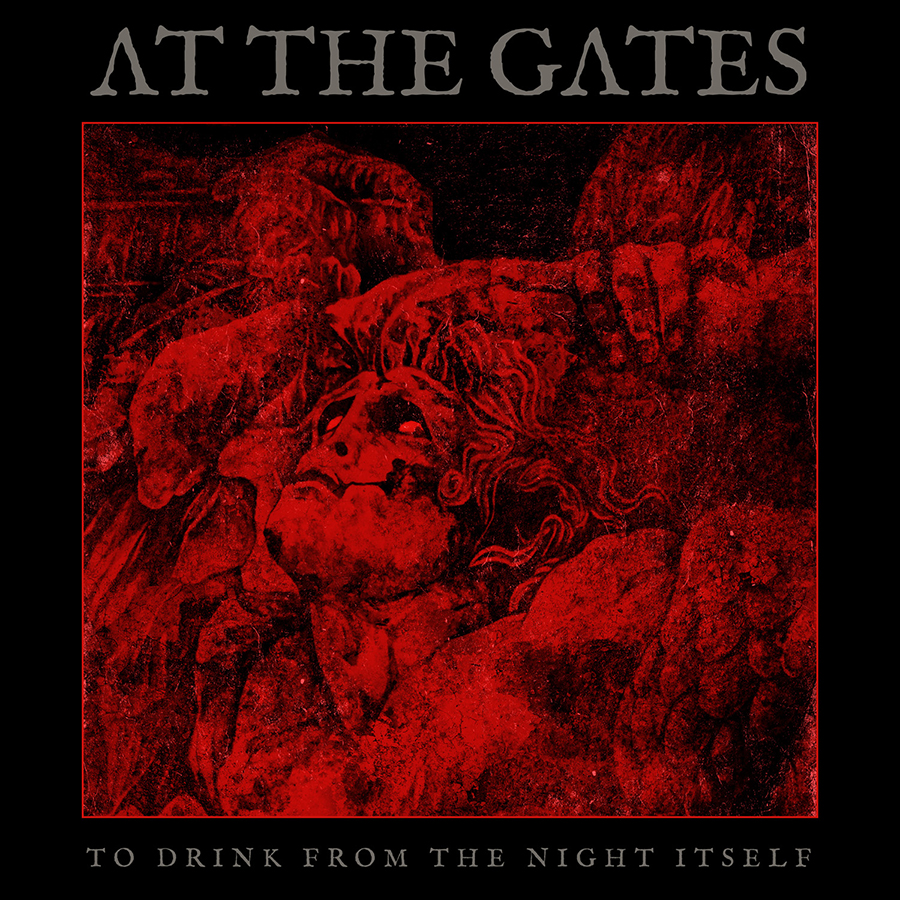 The Swedes come a ‘knocking At the Gates, venting forth their sixth album from the portals to purgatory. To ask if they are living up to their standards of olde seems a bit mundane, but since most will be wondering just about that: Yes, they do, in a genre defining way.

Today (May 18th) marks the release date of the sixth full length album, To Drink from the Night Itself, by the iconic (monumental?) Swedish death metal band At the Gates. They are perhaps best known for their aggressive technical guitar work, inspiring the sound of the early 90’s Swedish Death metal – or dubbed by many as the Gothenburg Sound. In 1994, while at the age of 21-22, they released their fourth (!) album. One that is by now arguably one of the best death metal releases this planet has ever seen; Slaughter of the Soul.

Their history after Slaughter is one of turbulence; a split-up, a re-union tour, awesome, neck braking live performances since 2008 and a (to me) somewhat disappointing re-union album in 2014 (At War with Reality). But, after hearing a song of their new material at NDF 2018, my hopes were up. To Drink from the Night Itself is already one hell of an album title, so what about the music? Well: holy high hell, this is At the Gates is worthy of their own legacy!

The intro (Der Widerstand) already heralds a step up in space, layers and technical soundscapes. The Swedes take the time to build this up over the album. The second album titling track, opens with the classical, in your face bass and drum lines and solid riffing AtG is known for. Half way, a more mysterious melody evolves, offering a peek into the other-worldliness of this album. A Palace of Daggers is for me the point where To Drink truly defines itself – a downwards yet blasting song that halfway turns into a dual, up tuned riffing piece. Riffing that will have even the starkest of black metalheads unconsciously nodding their heads. The multi layering continues on Daggers of Black Haze (how’s that for a f*cking awesome song title by the way?!) with its markedly slower pace and long but subtle solo.

Tomas Lindberg’s vocals also sound a bit less forced and hurried compared to At War. They have a more organic interplay with the bass and guitar lines. This may result in glimpses of ‘easy listening’ here and there. Is that a bad thing? Maybe, but I can’t be bothered, given the rest of the album. Do I miss Anders Björler? Yes, as he was intertwin(n)ed with the sound of AtG. Have they gone back in quality with replacement Jonas Stålhammar? Hell no!

The album gets (even) better and denser with In Nameless Sleep, rather manic song with a magnificent dual closing solo. Yours truly could go on about how the subtle synths on The Colours of the Beast only make this song more epic, but it suffices to say that they do. Closer The Mirror Black is the grand (orchestral) apotheosis of the dark space one gets into from drinking too much Night.

To Drink slams in your face, grabs you by the scrawny neck and immerses you into a spacious, layered world of madness, protest, riffing and ever flowing line of illusive melodies. Don’t expect a copy of either Slaughter or At War, but rather a genre defining masterpiece; atmospheric (Gothenburg) death metal at its best.

1. Der Widerstand
2. To Drink from the Night Itself
3. A Stare Bound in Stone
4. Palace of Lepers
5. Daggers of Black Haze
6. The Chasm
7. In Nameless Sleep
8. The Colours of the Beast
9. A Labyrinth of Tombs
10. Seas of Starvation
11. In Death They Shall Burn
12. The Mirror Black