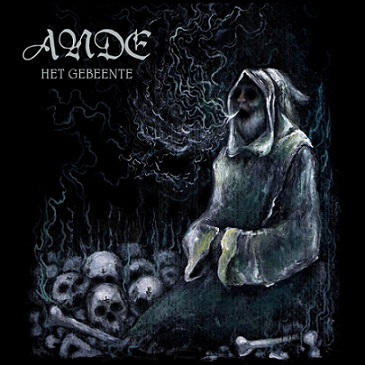 Ande is a Belgian one man black metal project by Jimmy Christiaens. This January, he released his second album, titled “Het Gebeente”, which is Dutch and roughly translates to “The Bones”. The album art by Luciana Nedelea is pretty cool and deserves to be mentioned. Although no black metal artist likes to hear it, the album fits well in the trend of Black Metal bands from Dutch/Belgian soil with old-fashioned Dutch for band names and album titles, like Gheestenland, Zwartketterij, Laster and Wederganger, to name just a few. So what does this release add to the black metal genre? Let’s see…

The album starts off with the aptly named “Intrede” (Entrance”) – a slow and depressing piano intro. As I don’t really like piano in black metal in general, I wasn’t too impressed by it, more so because the quality of the playing was not the best. Possibly this was done on purpose, in which case it fits really well in the subsequent music – raw, uncompromising and unpolished black metal with primal screams. The second track “Argwaan” immediately removes any doubt about which music genre it could be, changing straight away to smudgy black metal. The vocals sound far-away and under produced, comparable to the sound of someone practicing their screams in the basement while you are in the kitchen making muffins. This sound continues throughout the album. There are both interesting changes of pace as well as diverting dark riffs and pleasant melodies, to prevent the music from becoming too monotonous, occasionally even making for a catchy sound. The last track, called “Uittrede”(“Exit”) is an ambient piece of music, which allows you to slowly “exit” the listening experience.

Style wise, bands Like Burzum and Darkthrone come to mind. It seems more like a homage to this black metal style than a really new addition to the genre. Some have names bands like Wolves in the Throne Room as comparable, but in my opinion, “Het Gebeente” explores a different kind of atmosphere – instead of taking you to atmospheric heights, it takes you to depths – in true black metal style. Overall it makes for a pleasant listening experience of about half an hour, perfect for all your red wine-sipping and “Satan”- muttering. *slurp* Give it a listen! *Satan.*

By: Tabitha
Release: 7th of January 2017
Label: Own production