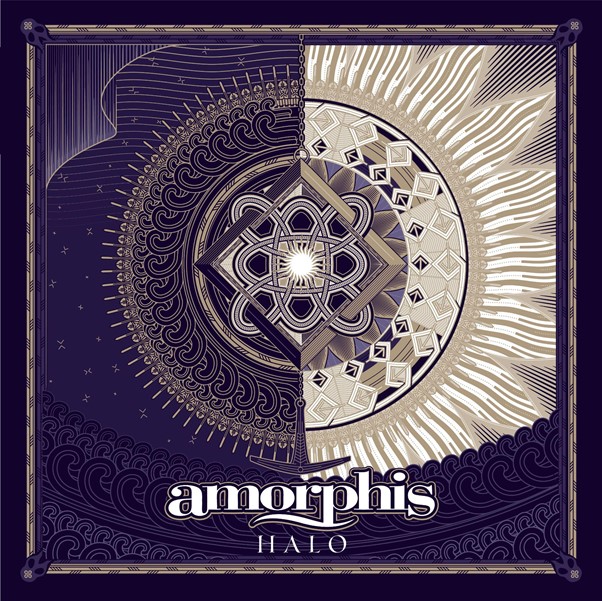 Amorphis is a very unique band in the world of metal simply because it has somehow taken them nearly 30 years to truly peak. The band has gone through several evolutions over the years, starting as a death metal band in the 90s with some highly-acclaimed albums (“Tales From the Thousand Lakes”) and then slowly making their way to their current phase which started with “Under the Red Cloud” and continued with “Queen of Time” – albums that are both some of the best releases of 2010s.

Here we are now, seven years after the release of that first album and seemingly concluding this triptych with “Halo,” which starts with “Northwards” and it’s immediately apparent that this album takes a step away from their two predecessors. It’s less full, maybe a bit gentler, stripped down and it takes its time. The band have said the record is both heavier and poppier than previous were, and weirdly enough it makes sense.

The vocalist Tomi Joutsen sounds absolutely immense in his growls that open the album and present the heaviness of the album, while there’s gentleness and touches of 70s prog rock in the middle of the song, as well as a fantastic drumming passage from Jan Rechberger. Amorphis are notoriously an impossible band to categorise and they continue with the genre-blending style on “Halo;” however there are definitely more proggy elements than there were on previous records. There’s also a continuous and undeniable touch of folk metal – it’s hard to pinpoint, but it’s there as it has been for much of their career.

“The Moon,” the first single from the album, finishes this initial portion of the record and gives us a taste of the poppier. The chorus is definitely catchy and memorable, although the song still features layers and presents quality that we’re used to from the Finns, who’ve also enlisted the help of Francesco Ferrini (Fleshgod Apocalypse) on orchestral arrangements and choir, and Jesse Zuretti keyboards for this album.

The production is again crisp and clean, and there are no issues with overproduction, which is something that’s been appearing here and there with some bands lately. The middle part of the album is, however, not the most memorable and a bit repetitive. Still, there’s a nice chorus on “When the Gods Came,” but Joutsen’s extremely low and powerful growls are what really holds it all at a decently high level, while his cleans manage to lull and soothe you as he talks of tales from Amorphis’ usual inspiration, the Finnish epic of Kalevala.

The titular “Halo” comes in with a suspenseful start and very melodic guitar work and a chorus that will be simple to sing along to at live shows, something that’s more reminiscent of songs like “House of Sleep” from the band’s previous work. It also brings back a more positive feeling to the album, which is continued in the upbeat and furious song “The Wolf.” The album, however, closes in a really special way with what is the most touching song on the album – “My Name is Night” for which Joutsen is joined on vocals by the Swedish vocalist Petronella Nettermalm who complements him wonderfully in this gentle, heartbreaking and romantic ballad.

Incredibly, “Halo” is the 14th full-length album for Amorphis, and – as I’ve read some other writers say after “Queen of Time” – the Finns have no right being this great so far into their career. While most bands will exhaust their good ideas in their initial five releases or so, Amorphis just keeps evolving and developing into better variations of itself while simultaneously paving a way for modern metal. With another appealing, modern and melodic record Amorphis are firmly establishing themselves as a band that any metalhead should explore.