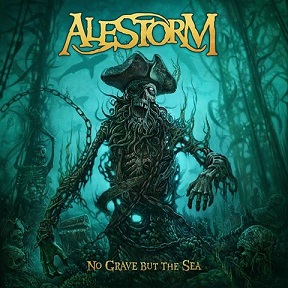 It’s time to strap on your wooden leg and eyepatch, get out a bottle ‘o rum and practice your best screechy pirate voice, because the pirate metallers Alestorm have docked with their fifth full-length No Grave But The Sea. Prepare for mindnumbing sing-alongs, fantastical pirate tales, songs about taverns and predominantly drinking, all served to you in a beyond predictable yet irrestistbly catchy hyper energetic, folky fashion. Ahoy!

The record opens with the epic title track ‘No Grave But The Sea‘, which for this bunch of songs is pretty heavy and is overtly bombastic (the trumpets remind a bit of Turisas’ Battle Metal), a trademark that you can find on the entire album. Along with ‘To The End Of The World‘, and album closer ‘Treasure Island‘, the song has a more cinematic approach and a tad less immature than the others. If this wasn’t Alestorm, I’d almost consider taking these songs for something serious.

Tracks like ‘Mexico‘, ‘Alestorm‘, and ‘Bar und Imbiss’ turn up the party mood to 11.The intro of ‘Alestorm‘, features a small step into death/metalcore-ish territories but quickly steps back onto familiar grounds when the sing-along chorus starts: ‘rum, beer, quests and mead, these are the things a pirate needs‘. No pirate tale is ever complete without a tavern, so get boozed up and enter a Thuringian bar, naturally ending up in a tavern brawl with ‘Bar und Imbiss‘.

The most notable song on the album is ‘Fucked With An Anchor‘ (am I the only one who sees a reference to Cannibal Corpse’s Fucked With A Knife in this?). The lyrics are comparable to a Disney version of * insert any gore/death/grindcore band*: ‘Fuck you, you’re a fucking wanker/We’re going to punch you right in the balls/Fuck you, with a fucking anchor/You’re all cunts so fuck you all!’. Add some cheerful tunes to it and you have a straightforward hit. And if you thought the above sounds ridiculous, start listening to ‘Pegleg Potion‘, of which the lyrics make you wonder how captein Chris Bowes cooks them up in his mind, being so far out.

If No Grave But The Sea is anything, it is the ultimate proof that the folk band has turned into THE party folk band of the moment, leaving behind the likes of Korpiklaani and Ensiferum. Alestorm-fans can blindly buy this album and haters gonna hate. Now join me in comradry singing, pour me a pint of the pegleg potion and lets drink until the end of time.