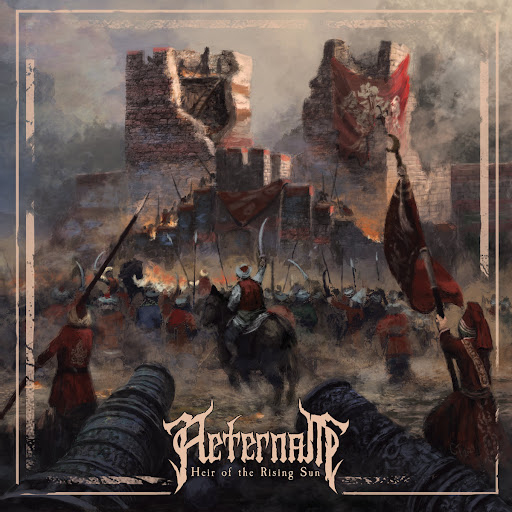 I think we all thought that when there’s an album on the Byzantine Empire it’ll be Turisas that releases it. Yet the Finns have all but disappeared, and instead we got one from the Canadian symph/melodeath outfit, Aeternam, and I for one could not be happier about that. But to see if my excitement was premature we are going to delve into this album called “Heir of the Rising Sun,” and see what happens.

I love a good intro – and “Osman’s Dream” is a beautiful piece where a charming elderly voice enchants you while playful eastern melodies invite you into the story. Exactly how I wanted this album to open. I’m slightly annoyed, however, that the escalation of the intro is interrupted by the first proper song, and instead of continuing the intense guitars a few more words are said. After those, “Beneath the Nightfall” is quite lovely, weaving together cleans and growls as well as metal sounds with a lot of Arabic/eastern musical influences.

“Irene” is a favourite of mine and grabs me from the first word sung – while nearly anyone can be taught to sing decently well, it’s hard to have this natural pull within one’s voice, but that’s something I’ve always found Achraf Loudiy, the band’s vocalist and guitarist, to have. In the second half of the track it becomes apparent that this is very much a story-telling album, one that will take you on a journey throughout the history of Constantinople.

“Heir of the Rising Sun” is definitely a very cinematic album that loves playing with its orchestrations and aims to deliver epic-sounding imagery. In fact, it maybe does that a bit too much at times and sacrifices some catchiness because of it. Still, it is indubitably technically very good. A softer intermezzo in the form of “Kasifi’s Verses” makes sure there’s no staleness in the album (and there wouldn’t be in any case) before we get into the second half of the record.

With all the folky elements of the old Byzantine Empire and the use of instruments such as bouzouki and the Turkish duduk one might be tempted to call this folk metal, but those influences never overshadow the basic melodeath sound of Aeternam. The guitars really come to the forefront in “Where the River Bends” while Loudiy’s harsh vocals have that familiar sound of his false-chord technique, which sounds more open than that of most harsh vocalists, giving him a unique sound that fits their music very well.

After the previous song was, to me, inexplicably Norse-themed, the band continues with the Byzantine Empire idea and probably the strongest part of the album itself. “The Treacherous Hunt” is one of the heaviest songs on the album and the drumming of Antoine Guertin drives the rhythm really well here while the guitars just sound tight and still very melodic.

With another softer intermezzo the ground is laid for the album’s magnum opus – “The Fall of Constantinople.” It can’t be anything other than fitting that a historical event of this magnitude gets an absolutely massive song, which is over ten minutes long. Rage is unleashed from the start, while there’s lots of drama coming from the orchestrations that blend in seamlessly, and the mix has to be applauded here. This track is clearly a culmination of everything the band has shown so far on this album and it’s genuinely an outstanding track that actually reminds me in ways of some of the Opeth songs of old, but with a lot more orchestration and drama. Quite simply, one of the best tracks of the year.

Romantic, authentic and energetic are some of the words that come to mind when summarising this album, and even though, I have some minor quibbles and I, at times, wish it focused a bit more on being more listener-friendly, I can’t deny the fact that this release is just really good quality. It’s a step up from Aeternam’s previous work technically, and one of those albums that just can’t not be appreciated due to the sheer experience that they bring. “Heir of the Rising Sun” is, in short, a captivating release that hopefully gets a lot of attention.