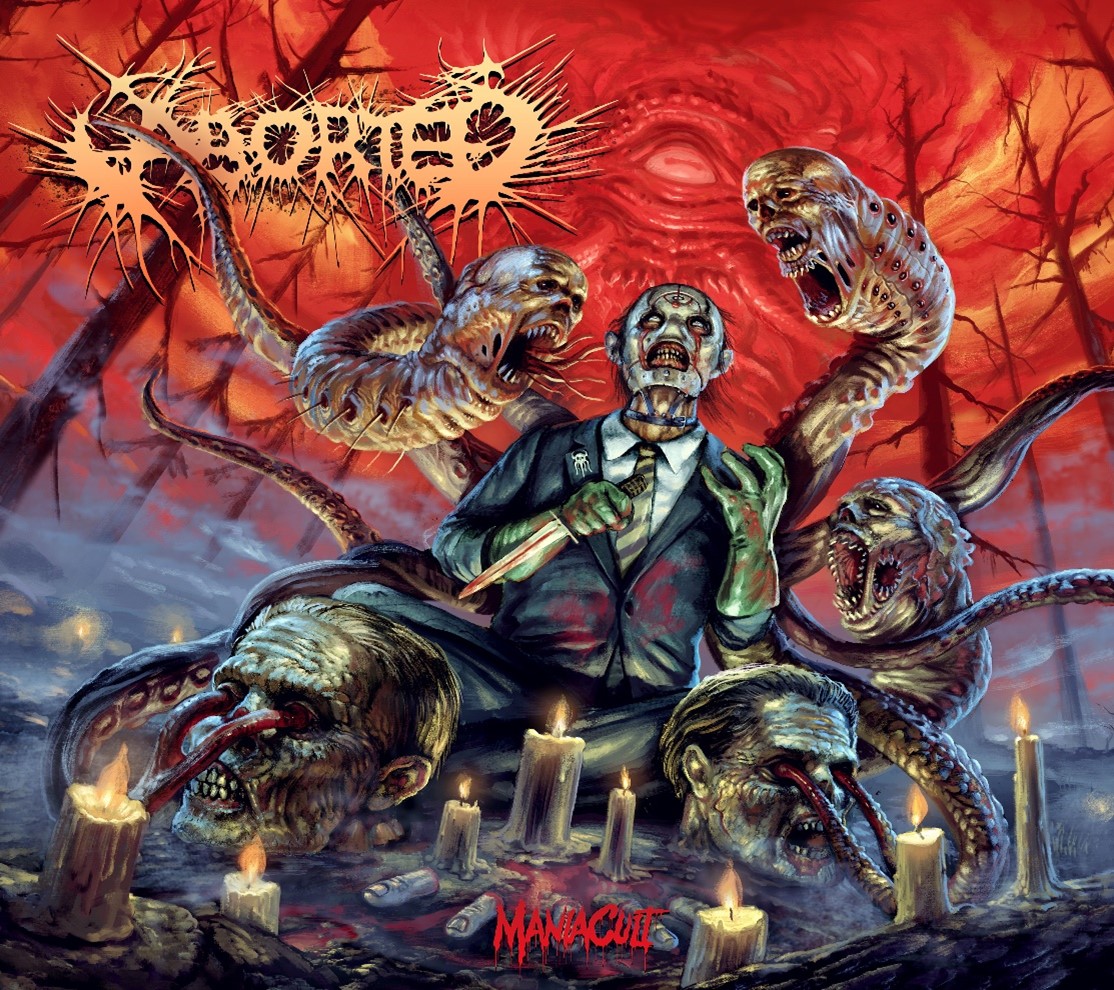 Aborted. This is a band that in my mind, needs no grand introduction, however that would be doing them a grave injustice. The extremely hard working death metalers based out of Belgium, have a vast body of work that extends back to the mid 1990’s. This is a band that has continuously progressed over the years, implementing various genres of music within their production. From their early days of death grind to a few of my favorite early albums Goremageddon: The Saw and the Carnage Done and The Archaic Abattoir to more current albums like Retrogore and Terrorvision, and everything in between, this is a band that is constantly evolving and bringing a brutal package of extreme devastation upon our ears. Its always a good day when I hear Aborted is releasing new music.

This brings us to the band latest full length, Maniacult. This is truly one of the easier reviews I have had the pleasure of writing and that is not due to lack of complexity or uniqueness, there is simply tons of exciting points to discuss within Maniacult. Throughout the duration of the album, simply put, there are no weak points. One of the things I love about Aborted is that sometimes they can be quite unpredictable, but their ability to write in a fluid manner always shines through and each piece is a composition of twists and turns in and of itself. When listening to Maniacult, you get the traditional speed, aggression, technicality and groove that Aborted has made a name for themselves with, but also with this album, I really enjoy the direction that they seem to be moving in. There is plenty of diversity here in terms of genre and writing style, specifically the addition of more darker or even “black metal-esque” parts that are implemented with such precision and climactic placement. Often times, these types of parts can be quite cathartic to me and as discussed previously, you cant always infer where they are going to go with the next part but the transitions are always creaseless.

Maniacult starts off with the intro track “Verderf”. Verderf coming in at just under three minutes is a haunting, slow, bleak introduction that sets an uneasy tone for the carnage that is about to ensue on the next track. Following Verderf is the title track of the album, Maniacult. This track is a mid-tempo (mid-tempo for Aborted) grinder that punches you right in the chest heavy handedly. There is definitely a tasteful deathcore influence in this song after it gets underway but in true aborted fashion, it still eviscerates you with intensity. Track three of the album is one of the singles they released in past weeks, Impetus Odi and as its name refers to in Latin, it truly is a hate driven song. This is one of the most nonstop aggressive tracks on Maniacult and here we can bare witness to what the great Ken Bedene can do behind the drumkit.

One of my favorite tracks on Maniacult is track four, Portal to Vacuity. This track implements some of that black metal influence that was discussed above. This track starts off with some melancholy tremolo picking on guitars and comes in with a solid blast beat behind it. Then, with the flip of a switch, it goes straight into a spiraling buffet of blissful death grind with speed and ferocity. A large portion of this song is quite atmospheric which in my opinion really gives this specific track, as well as the album great texture. After this track we have track five, Dementophobia (Sven De Caluwe always has a way with words doesn’t he?) this track is a true grinder and seems to be a throwback to The Saw and the Carnage Done days, once again the texture and diversity on this album is done beautifully.

I will stop here with the individual song reviews, I could talk about this album for paragraphs but my main point here is this: become familiar with this entire album. I truly believe Maniacult may become the extreme album of the year. As stated above, this album has something for everyone. Brutal breakdowns, technicality, highly talented musicianship, death metal, black metal, groove, deathcore, atmosphere, unique transitions, sick vocals; it is highly climactic, creating an aura of catharsis cloaked in brutality and aggression. It’s been a while since I felt like I could say an entire album felt this angry and brooding with so much texture. Another point to add is that sonically, this album is mixed perfect, clean, clear, precise and powerful; cannot go wrong with Kohlekeller Studio. Devastation awaits on September 10th!