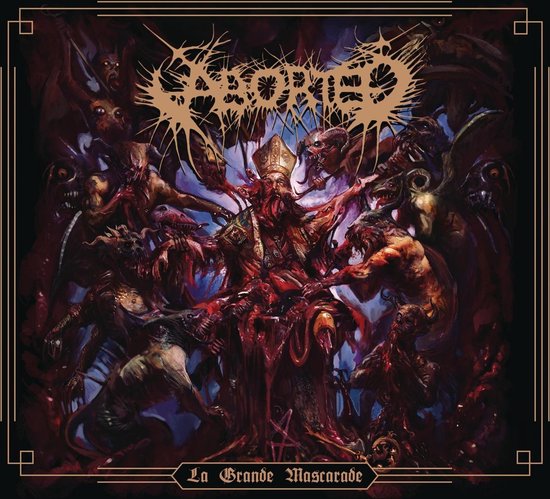 Aborted is a Brutal Death Metal Band from Waregem, Belgium. Forming Back in 1995 by lead vocalist Sven de Caluwé. With 10 studio albums and 6 EPs to their name, it’s fair to say Aborted is one of the hardest working bands touring these days.

Aborted has a new EP out called “La Grande Mascarade” released April 17, 2020 via Century Media and Aborted did not hold back, at all. The EP is only 11 minutes 50 seconds long, and is non-stop BRUTAL. The first song “Gloom and The Art of Tribulation” opens up with my favorite lines of dialogue from Dr. Loomis. Along with the music and lyrics, its sets up the tone brilliantly of helplessness as one succumbs to their own psychotic meltdown with no way to stop it and tries but fails to find a way out.

The next song titled “Serpent of Depravity”, follows up the first song perfectly, maintaining the high-speed brutal metal that is to be expected from Aborted. One of my favorite things about Aborted, and this song in particular is, they know how to make a song flow from fast brutal chaos to slower punchier chugs flawlessly. Creating a super heavy song that will make you want to move and lift the heaviest thing nearby; at least for me anyway. Sven does an amazing job of using this song to tell a story of someone being haunted and possessed by a demonic entity. When he says “Nothing but a Demonical Intrusion, Slithering its way Through a Myriad of Illusions” in his “black metal vocals” if you will, you can’t help but feel creeped out as if you were staring this demon in the face, and the demon was screaming the lyric in your face.

Aborted definitely takes their music and image very serious, but they also like to have fun with their Albums and EPs when appropriate. Like with parental advisory saying “Banned in at least 900 Countries”. Listing the equipment used as “Aborted uses and abuses” instead of the typical “Aborted uses”; it makes listening to their music more enjoyable knowing that the members have a good sense of humor and are not always the typical grumpy mean looking metal heads so many other bands are. Now as a fan of Aborted, I’m really hoping for history to repeat itself. I was blown away by their EP “Bathos” in 2017. Then they followed that up with their full-length Album “TerrorVision” in 2018 which I would have given an 11 out of 10 Stars had I reviewed it. So, let’s hope Aborted has some more brutal tracks in the works! Recently Aborted had to cancel their North American tour with Napalm Death due to the COVID-19 (Coronavirus) which for any band, is a big loss! So, I urge people to head over to the webstore and buy some Merchandise to help these guys out!