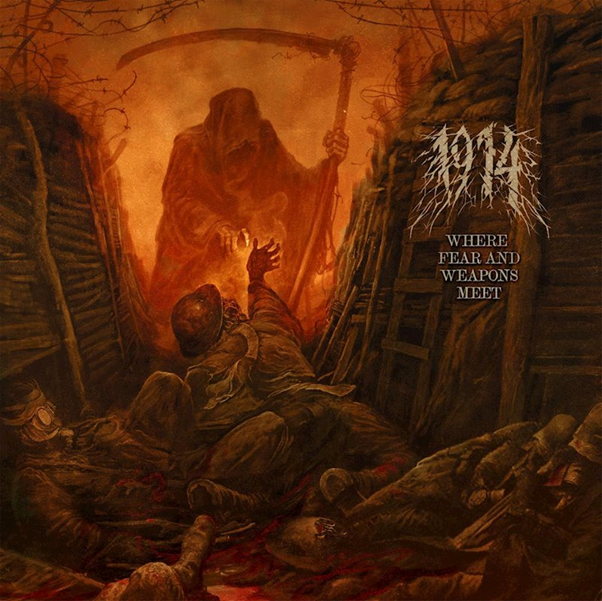 It’s an odd name for a band – 1914 – at least until you realise what their music is about. One of the worst years in human history, the year in which the war that would end all wars started. 1914 is a Ukrainian blackened death metal band that focuses on World War I in their lyrics, a truly dark period of history that lends itself beautifully to their sound and their third full length album, “Where Fear and Weapons Meet.”

The album starts where the war did – in Bosnia with a Serbian patriotic song. “War In” this time features an old tune – a simple song about the love of the country, which gets crudely interrupted by shots and the chaos that ensues towards the end. Guitars take over as the darkness of the upcoming era truly begins and the story moves onto the assassination of Archduke Franz Ferdinand. A war, which happened – according to Blackadder – “because it was too much trouble not to have a war” starts in the Bosnian capital of Sarajevo to which the band greets you. Dobrodošli u Sarajevo. Dobrodošli u prvi svetski rat.

With the next song 1914 really shows how well they can combine the brutality of black/blackened death with catchy riffs that stay in your head. “Vimy Ridge (In Memory of Filip Konowal)” is not of the most memorable songs on the album, but it could be one of those that make it to live settings as the drums lead it along very well, which should make even the most elitist black metal fans move their head in rhythm slightly.

The band continues with one of the most brutal stories war has ever seen. The German officers discuss the tunnels beneath them as one of them suspects explosives could be being planted, but his superior calls this ridiculous. Yet the song is fast, grim and signals the impending disaster with its symphonic elements. As the explosives are triggered the guitars stop and the band serves up only the awful sound of a wasteland post-explosion. It’s quiet, but it isn’t, really. The thoroughly unpleasant sound in your ears lingers as it would have in the battle of Messines. At 3AM that night, 10.000 were killed.

“Where Fear and Weapons Meet” is an album full of extremely haunting stories, made so much more chilling by the fact that they’re not just stories, but real events from the war. However, musically there’s not that much room for being interesting when it comes to blackened death metal, which is why the band interrupts the harshness of the album with an acoustic song in the middle called “Coward” performed by the Ukrainian folk artist Sasha Boole. The light and romantic-sounding piece speaks of a soldier deserting and getting shot for it, yet it still feels uplifting.

It doesn’t last for long. A titan amongst metal vocalists, Nick Holmes, (Paradise Lost, Bloodbath) joins the band and sings what is probably my favourite song on the album – “…And a Cross Now Marks His Place.” The drumming is especially great on this song and Holmes’ desperate vocals add another great dimension to the grief and sorrow of the story in which War herself writes a letter to the family of a young man fallen in battle. There’s also a hint of sludge/doom metal in the chorus, which is delivered with almost clean vocals and very memorable.

The album could be accused of being a bit top heavy, but 1914 still doesn’t really let off in the latter half and serves some of the hardest songs on the album with “Mit Gott für König und Vaterland” – a surprisingly anti-French song from a German perspective and “The Green Fields of France,” an almost 11 minutes long piece that begins with bagpiping before heading into more familiar extreme metal waters as it finishes off this captivating release. As is the custom with 1914 albums it ends with a track called “War Out,” another soft piece from the 1910s that speaks of mothers losing their sons to the war.

After over a month away from reviewing an album this has been a fantastic find. I had no plans to check out the release before, but the singles grabbed me and the appeal only got bigger as I heard the entire album. I love tracks with a story, with some sort of romance in them and an overall sense of art and that’s something that’s absolutely in abundance with “Where Fear and Weapons Meet.” A refreshment on the brutality that happened barely over a 100 years ago is now reawakened with 1914 in what is certainly to be one of the best extreme metal releases of the year.