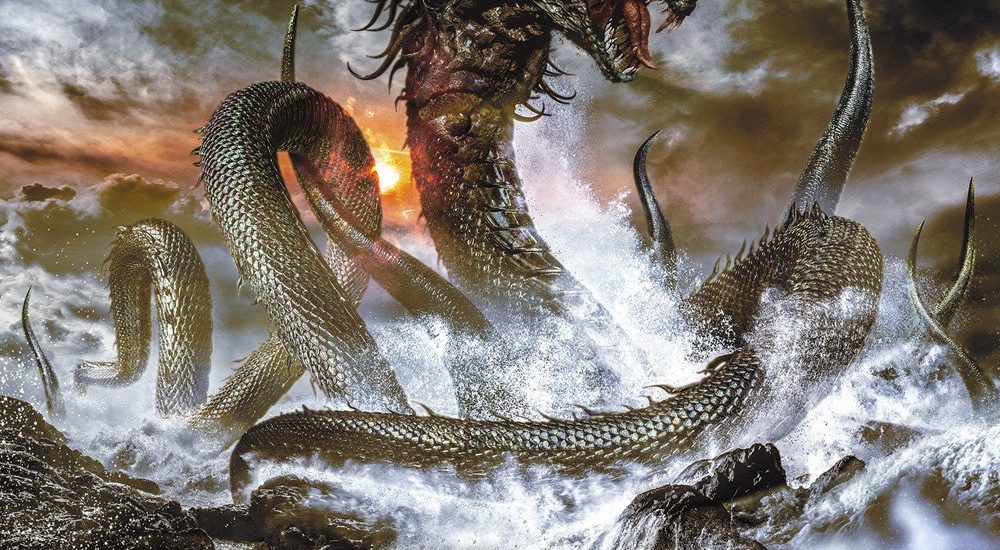 Three years after the ambitious project “Beloved Antichrist”, Therion is back with “Leviathan”. In contrary to the previous record, Leviathan is more of a regular record, where Beloved Antichrist was a big scale project, which was more of a theater play made into an album.
Now, we can say that every Therion record has its own feel to it. Nonetheless, Therion has their own style, morphing from Death Metal back in the early days to their better-known classical opera records of the last decade or so. While listening to Leviathan, I got flashbacks to the days of Lemuria and Gothic Kabbalah.

Leviathan starts off with a pretty straightforward track in the form of “The Leaf on the Oak of Far”. Personally, I’m not a big fan of distorted sound effects over sung lyrics, so that brings the track a little bit down for me. Next up was one thing I would not have thought would happen. Therion joined forces with former Nightwish bassist and vocalist Marko Hietala. The pair mix well and Marko’s voice mixes well in the track and Taida Nazraić also does a stellar job.

Title track “Leviathan” brings me back to Lemuria and is one of my personal favorites. With Chiara Malvestiti as soprano on this track combined with nice guitar solos and the backing choir, it makes for a great song. Therion also doesn’t back down from mixing different languages into their tracks, as is the case with “Die Wellen der Zeit” and once again I must say that Taida has such a smooth and pleasant voice on this record. We also get to hear a familiar member making his return to Therion here, as Snowy Shaw takes his seat behind the drums here (and on several other tracks).
After the fast-paced Aži Dahāka, we get to hear “Eye of Algol” which takes me back to the style of Gothic Caballah and Lemuria all the same. It’s classic Therion as a lot of fans really wanted to hear again. “Nocturnal Light” feels like a grand song, which would have been better as the records last song. There is so much happening with the impressive drums, bass lines, flamboyant singing and choir in the background.

Since we’re naming every song on the record, it’s too late to turn my back on this approach. “Great Marquis of Hell” feels like a new direction for Therion. It’s close to a power metal song and to be fair, it doesn’t feel misplaced on Leviathan. It’s also the shortest track with just being a little bit over two and a half minutes long. I know I said that Leviathan makes me think of Gothic Kaballah before and I’m glad that one of the guest singers of one of my favorite tracks of that record also returns. Mats Levén is back in “Psalm of Retribution” although not with as much as a mark as on the latter record.

I just love Thomas Vikström‘s singing on “El Primer Sol”. It feels just a bit more powerful and passionate, not that he’s not passionate before. There is just a little bit of edginess to his singing here. Last but not least we find “Ten Courts of Diyu” which is a short story on itself. The combination of Taida Nazraić, Noa Gruman and the whole style of the song. It’s a perfect ending of Leviathan and kind of makes me want more. Well, thankfully, Leviathan is part of an epic trilogy, with Leviathan II and III scheduled for release in 2022 and 2023.