By Laetitia
14 /12 /2015 – In the new year, the Italian metal maestro’s from Fleshgod Apocalypse will release their fourth album, King. Metal-Exposure spoke with front man and guitarist Tommaso Riccardi about the concept of the record, society today and the recording process.

Let’s talk about the new record. Your last album Labyrinth came out in 2013. What was the mind set when you started on King?
“Every album is a different story and it’s always a challenge. King was particular because we were going to work with new people. As you know, we have been recording with Marco Mastrobuono (Hour of Penance) at Kick Recording studio. We have been friends for a while, but we never had the experience of recording elsewhere besides 16th Cellar Studios. We would do the mixing and mastering with the mighty Jens Bogren and we were very curious about that. Last but not least, this is our fourth album and we have been defining our style in the last years, so we were very anxious to see what was going to happen. We were trying to push ourselves to the limit in terms of finding the perfect blend in our music. We are really satisfied about this. It really feels like we captured our music the way we imagined it.” 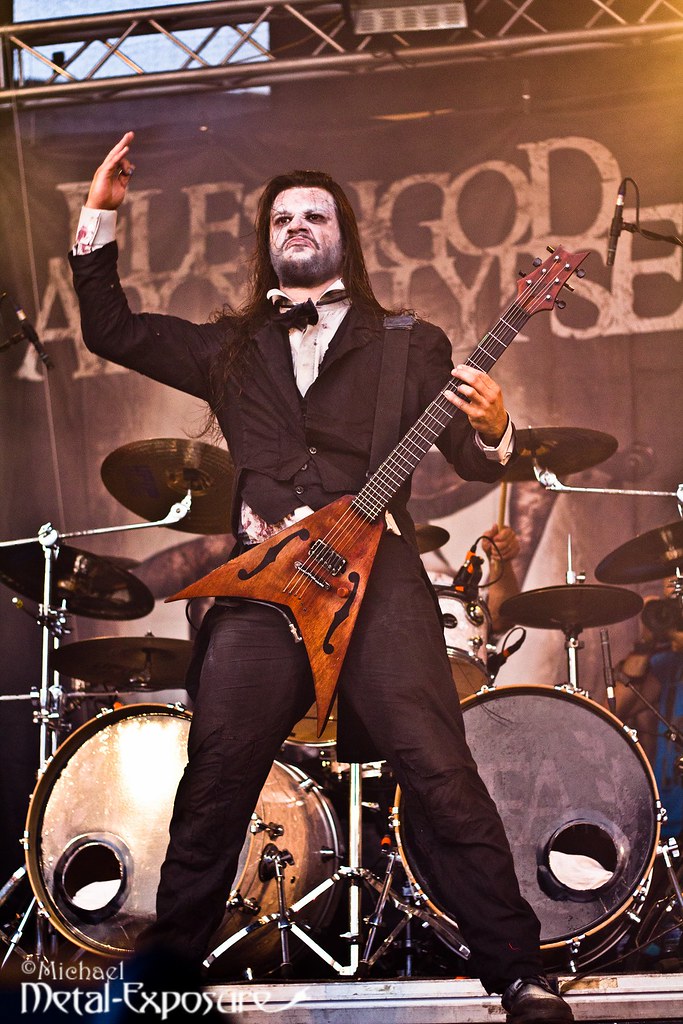 How did working with these new people influence your sound?
“The fact is that these people are very skilled. We were sure that the quality would be good, but it has been challenging for us to rely on other people in terms of sound expression. It was stressful, since we are super meticulous about every little aspect. We had many things to say, even to Jens, like: ‘ah we’d like to fix this or that.’ Still, it has been good for me to see how the artistic side of production, the interpretation of sounds and even the timbers of different instruments have influenced the album. There are many things you imagine but sometimes you need to experience of great producers to understand that the thing you had in mind had to be triggered differently to get exactly that result.”

So this is your fourth record. You’ve said in previous interviews that Labyrinth was the first mature Fleshgod Apocalypse record. How would you describe King with this in mind?
“Labyrinth was really mature in regard to some of the aspects of the composition and the ability to blend a lot of complex elements. It also pushed us to the highest complexity of songs we’ve written in our history. King is very different on some levels. Some aspects are extremely direct and in your face and there is a lot of groove and riffing in there.

It’s like we did a synthesis of all our elements. We found a way to combine and arrange them and the result is exactly how we imagined it. So I think we completed a path with this album. What I am also happy about, aside from the technical composition issues that we have been solving and improving during the writing process, is that we have written a couple of our best songs.”

What can you tell us about the lyrical themes of the album?
“We really like doing concept albums. It is very important for us to tell a story. Labyrinth was a personal story. It was about feelings that everybody has to go through in life, about the relationship between the light and the dark side inside of us. King is more about what is going on in the world today. It is also connected to ourselves, because I like to see things in a psychological way: the way we interpret the reality around us.

We felt the necessity to talk about things that are happening today. I think nobody can deny this: we are going through a very deep crisis in our society and not only economically. It is also a crisis of our values. We are dealing with the differences between many cultures, the necessity of integration and the many changes we have to make to understand each other. When there are these kind of difficulties, we can choose to be brave and use our rationality to push things in the right direction, but there is always the big problem with fear. It always pushes us in the wrong direction. When fear starts being present, people always react in stupid ways and it creates even more of a disease in society itself. If you are afraid, you are not able to choose what is right and you lose sight of the values we have. The sad part is that our culture, art and psychological approach to life is really getting sick. The concept of the album is the story of a king who has many problems in dealing with the characters in his court. They try to control him and take power. This king is the only positive character and he is trying to keep the sovereign together. He tries to do things with integrity and tries to keep his values. Of course, as you can see on the cover of the album, the king is tired. This king is fighting against windmills. All the people that surround him do not believe in the same things. This represents our old world of values and the good things that are really suffering at this moment. It is also a hope that we have. As we said when we released the album cover: ‘we should all hail the king that is inside of us’. Every single person is able to connect with the king inside him or herself to act in the proper way, in the right way to bring our world back to where it was before.”

Regarding the concept, you talked about the loss of values. How do you experience this around you, in everyday life?
“It is something I feel in the air. You turn on the TV and you see that everything is getting so fake. In art for example, it is full of talent shows, but everything they are building up is far from reality. Reality is getting mixed with fiction and you cannot make the distinction anymore and I am really worried about that. I feel like generations are growing up with this and that is not good. Even in art and music, there is a dark era at this moment. It is hard to find quality and everything is becoming quantity.

Let’s be straight: this is cyclical. The political events and all give you the idea that something is changing and that we are in a deep crisis. It’s not only economical and this is reflected in art and culture and in how people behave. I really see that: it is hard for people to understand that when something like this is happening, the worst thing you can do is react with violence and with less tolerance. You don’t see that you are feeding the same monster that has been created by the situation itself. We should open our minds and do as much as we can to create art to influence the world in a positive way. We shouldn’t be clubbed into submission. Unfortunately, that is a pretty natural process that cyclically happens in history. So I guess there is nothing we can do to stop the whole world from going in that direction. On the other hand I really feel that the more it happens, the more I hail the king that is inside of me and try to contrast that process with personal improvement. I try to get better at what I do, I try to communicate more and more and to give energy to people when I am on stage. If everybody did their best instead of criticising the rest of the world and complaining about the fact that these are difficult times, we would rise up again and it would be better than before. Although people are lazy sometimes, they prefer to stay and complain instead of reacting. So I am just trying to react with positivity to negativity. 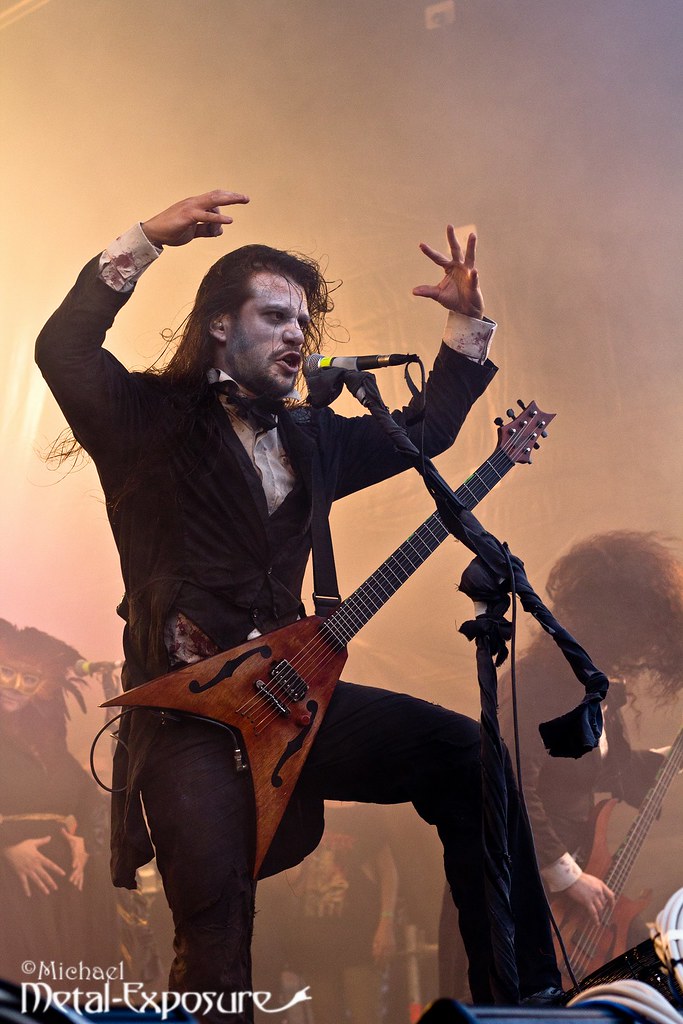 What song on this album stands out the most to you?
“I think I really love ‘Cold as Perfection.’ This is a song that is about the fear of getting old and the dear of changes. We are so attached to the idea of perfection that we don’t realize that perfection is the opposite of good. Perfection is death. It is has no life. On the other hand, we can find beauty in perfection. I have been facing this in my own character. Being a perfectionist has a bright side: it means that you care about every little detail and you work on that. Of course this brings excellent results but you also have to face that if you don’t regard your limits and skill yourself into using those limits to make things great, you will get lost. You get lost into being too hard on yourself in a useless way and you can also really ruin your talents with too much perfection. So, that story is told through a character who is afraid to get old and doesn’t accept that. It is one of the ways in which people use perfection in a self destructive manner.”

Fleshgod Apocalypse works a lot with concepts: are all your albums separate concept albums or do the records tell one bigger story?
“I do think that they tell a bigger story together. If you look at our concepts: Oracles was really about the institutions and the way they use fear to control people. Mafia was about mafia, which is another institution in a way. It is not official, but it is present in our territory and it’s like a second state, a hidden second government. In that case there is also a deep use of fear. Agony was about the reaction we have to those things. For many different reasons, everybody is scared for something. Sometimes these fears bring you to react in a way that hurts other people. Labyrinth went really deep into that on a more personal level and into the fight that we do within ourselves, with ourselves. It covers the need we have to understand our own story in order to face our deepest fears and make the bright side come up and conquer the dark side. King is about the way this reflects in the whole world and in our society. I think that Fleshgod Apocalypse is really about the deep relationship that there is between feelings, rationality and the impact that this has on the world, society and on humanity in different aspects.”

To wrap it up: you have a US tour coming up, are there any plans for Europe?
“We are still working on it and 99% will be officialised in the next weeks. We already announced gigs in the UK, but we are working on the EU. I can’t say anything in particular yet, but we have many plans. So stay tuned because things are going to come out in the next days.”