It´s time to rock hard! This 2015, your Metal-Exposure crew went back to the Amphitheater in Gelsenkirchen to attend the 13th edition of the Rock Hard Festival. This year the festival was sold out, so obviously the other festival in Gelsenkirchen “Rock im Revier” didn´t influence ticket sales. Which makes sense, as Rock Hard has a loyal fan base..and who can blame them, with the amazing location, pleasant vibes and awesome party? Rock im Revier however, didn´t turn out to do so well – at times, it was very quiet there and some of the major bands only had a couple of hundred visitors. But that’s a different story!

We´ve only had good experiences with the Rock Hard festival so far. Only last year we had a blast with bands like The apokalyptischen Reiter, Carcass, Tesla and Testament. This year was a bit different music-wise – with more ´classic metal´. For us this meant that the lineup was slightly less interesting, but of course it was still worthwhile, with bands like Venom, Kreator and Overkill.

Arriving on Thursday with near perfect weather, we put up our tent and slowly let go of the stress of daily life, in favour of the relaxed atmosphere of a festival. Not much happening on Thursday, just the party in the partytent. Unfortunately, the DJ wasn´t playing music to our liking (too much thrash, no party music) so we left the party pretty early to have some beers at the campsite. 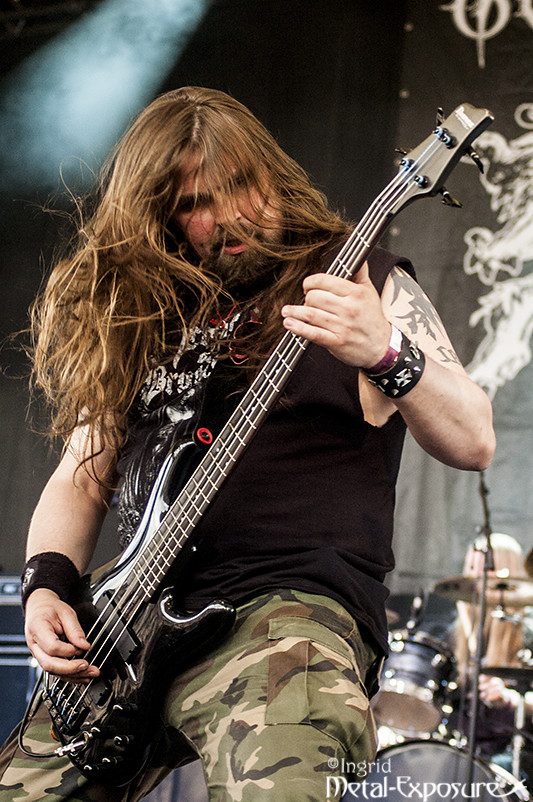 Friday
Now God Dethroned is band that a lot of people had been looking forward to especially, mostly because this was their first show in Germany after they announced their comeback for this year. Expectations were not entirely met, although there was some discussion on the matter – some were lyrical about the show, others disappointed. Personally, I thought that even though the performance was good, it lacked atmosphere. Maybe the Rock Hard festival was not the right place for this band. I did however thoroughly enjoy hearing songs like Hating Life, Nihilism, Soul Sweeper, and especially Soul Capture 1562 (which is an amazing song and they performed it well, but it´s not a party song, so to speak). Ending with Sigma Enigma and the Grand Grimoire, the God Dethroned show didn´t satisfy, but made me want more! 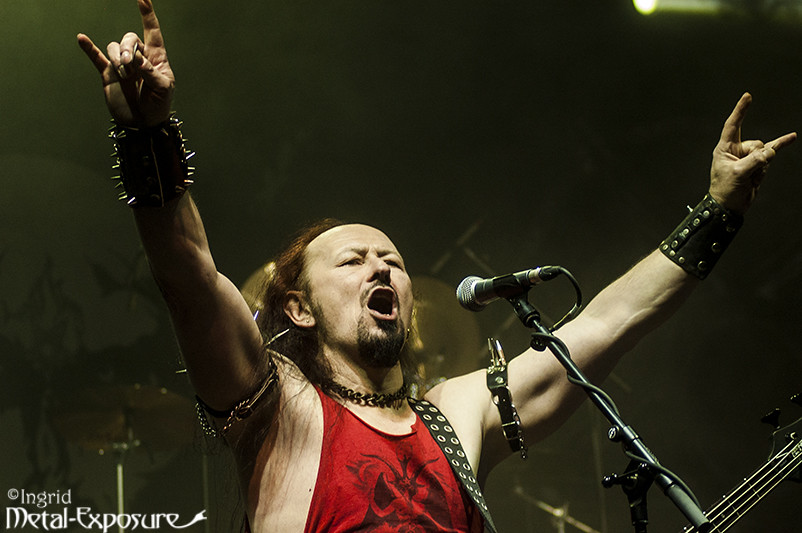 Venom is a force to be reckoned with, an old school yet powerful band still ready to rock, more than 35 years after they started. Cronos rocked the stage with his amazing outfit and brought to us the classics – Black Metal, Buried Alive, Countess Bathory – as well as some songs from their latest album “From The Very Depths”, like Long Haired Punks, Rise and Grinding Teeth. It was well balanced, with the new songs blending in nicely, although not creating the same enthusiasm with the audience as of course the old songs do. There were some very fine pyrotechnics supporting the 90-minute show, which made the entire experience extremely gratifying – a worthy headliner!

Saturday
Saturday promised to be a bright and sunny day, starting off really well with some familiar Rock Hard sunshine. Who wants to watch a band at this hour and in this heat? Well, a lot of people actually. Because the first band of the Saturday, Deserted Fear, turned out to be the discovery of the festival. Never mind the 13 in a dozen name, these guys brought brutal and get-down-to-business death metal that made plenty of heads bang! So if you see this name on a running order, don´t miss it! Luckily, they´ll also be at Party San open air, so we can check them out again! 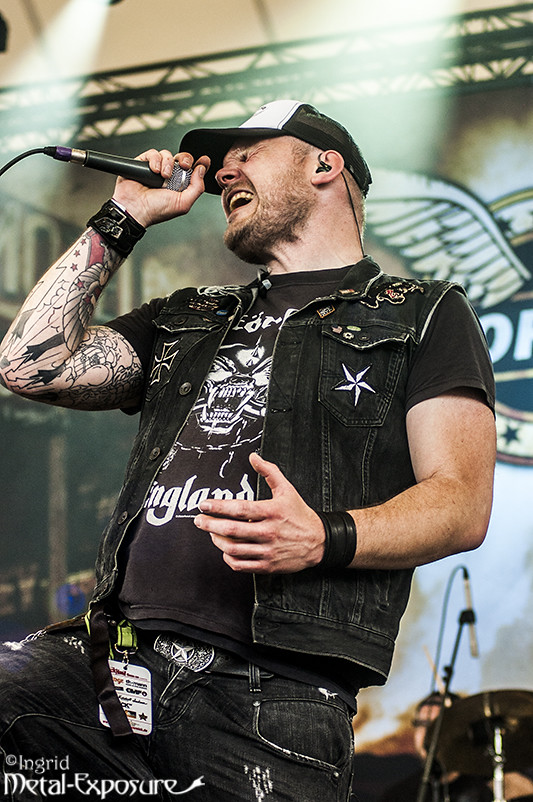 We were staying at the festival area for the next band of the day. You can´t find a band more fitting for this time of day on this particular festival than Motorjesus. You have your beer, the sun, your buddies, and a band that knows how to play hard rock as if they´ve invented it. They played a short set, but it was enjoyable nonetheless. The encore (or Flughafen, as the singer called it jokingly) was a medley of some nice rock classics –it sounded good and created a nice atmosphere. Some bands need covers to wake the crowd up, but Motorjesus was doing just fine with their own stuff, so this was just an extra! Nice one! 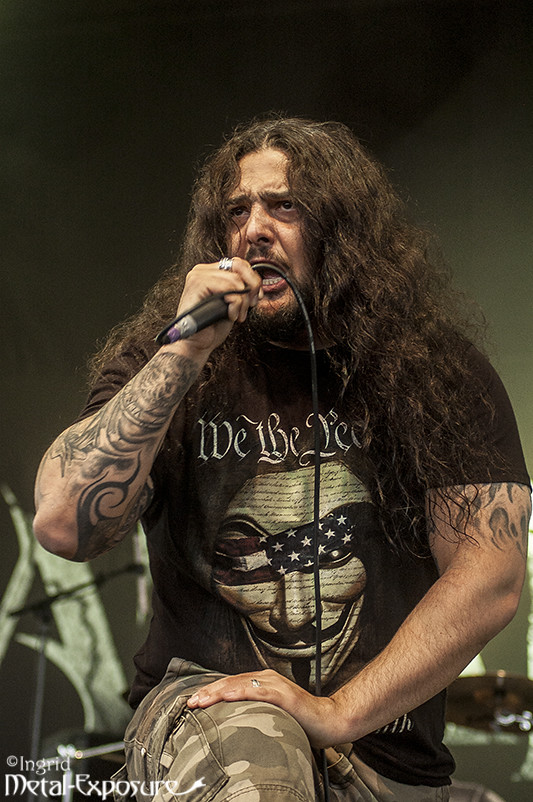 One of our personal highlights this year was Canadian metal formation Kataklysm. Their Death Metal brought a bit more extreme to this year’s lineup. Full of energy they entered the stage and started blowing us away immediately, though it seemed a bit as if the general Rock Hard crowd couldn’t handle this. Therefor their famous security stress test wasn’t the biggest success I’ve seen. Nevertheless they played a great and tight show with a lot of their classics, but also premiered a new song ‘Thy Serpents Tongue’from their upcoming cd (of Ghosts and Gods) live.

Well, an oldschool Doro-set was promised, and an old-school Doro-Set was delivered. But oh my, how she still can sing! Like the music or not, you cannot deny that Doro still knows how to rock the stage as well as the audience. Playing almost exclusively Warlock-songs (there was one Priest-cover) like Touch of Evil, Für Immer and All We Are, Doro and band were whipping the audience in a frenzy. The amphitheater was packed! She ended the setlist with Earthshaker Rock and with a lot of happy fans. 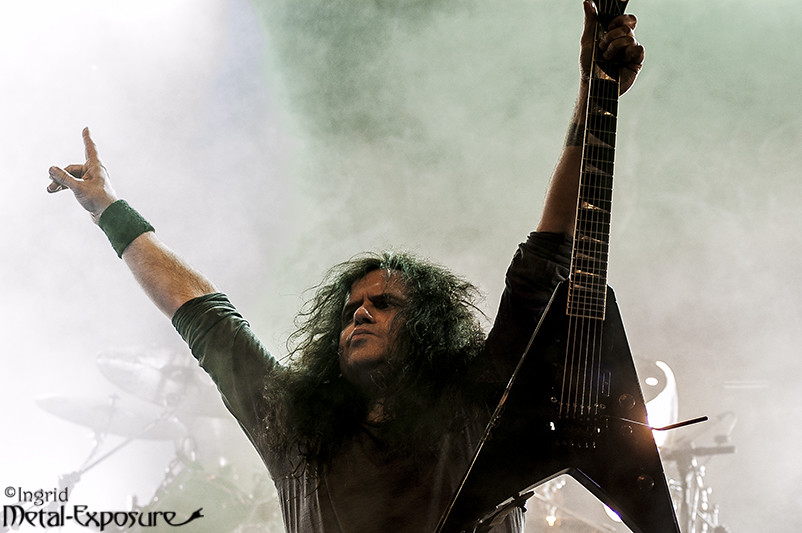 A recipe for success, you might call Kreator. I don’t know how many times this band has already had acte de presence at Rock Hard, but I remember them for sure from 2014, when they were raising their flag of hate over the Amphitheater. Not much surprising then, that they were a raging success with the audience again this year, with moshpits, headbanging and fist-in-the-airing. This is exactly what the headliner of Rock Hard should be like!
After this great performance, we were ready to party some more in the party tent. Thankfully, this DJ knew what to play. So the cocktails were flying around and there was plenty of dancing going on. Just one request to the festival organization: Please stop with the whole stripper-act. It’s unnecessary and even slightly disgusting, especially when you see the rows of men practically drooling whilst looking at it. It’s very much a mood-killer!

On Sunday the first band we tuned in for was Refuge. This new Rage-formation was a fitting band for the Rock Hard festival – only a few years before, Rage had done a very elaborate show with orchestra at the amphitheater. However, we found that the show lacked inspiration. Possibly because it is not really our kind of music, but also maybe because the band just isn’t what it was anymore. Or maybe because it actually was their first show as Refuge. Who knows? 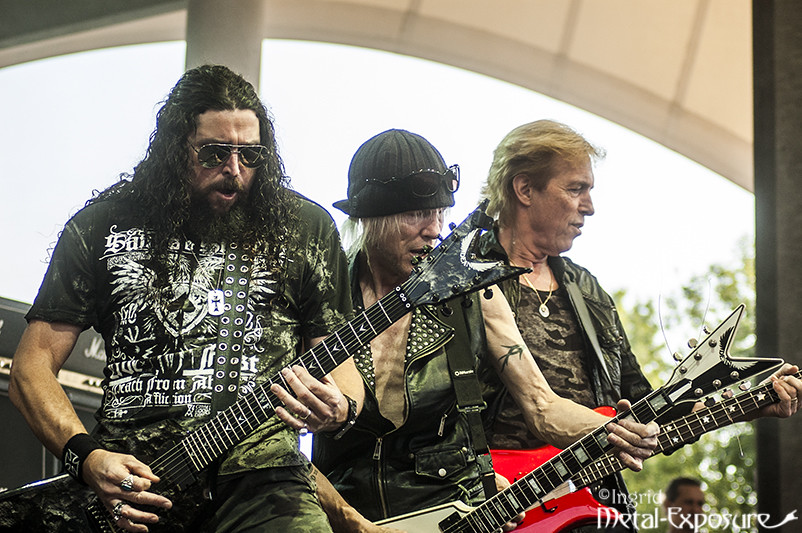 Michael Schenker’s Temple of Rock show next up was very pleasant, sitting in the afternoon sun and listening to some classics of UFO and the Scorpions being played. Excellent party music with a party atmosphere!
I have the feeling I am repeating myself, but Overkill was a perfect band for the Rock Hard festival. Oldschool thrash is what works best at this festival – and frontman Bobby “Blitz” Ellsworth and band delivered! The audience was thoroughly enjoying it with some enthusiastic moshing and shouting along. Some of the songs that were played were Armorist, In Union We Stand, (ofcourse) Overkill and to everyone’s delight, Elimination and Fuck You during the encore. They ended with..oh look!..another Judas Priest cover (Take On The World)! This should have been the headliner of the festival, leaving everyone happy and full of energy, but instead the headliner was Black Star Riders, which was in theory a good idea.. 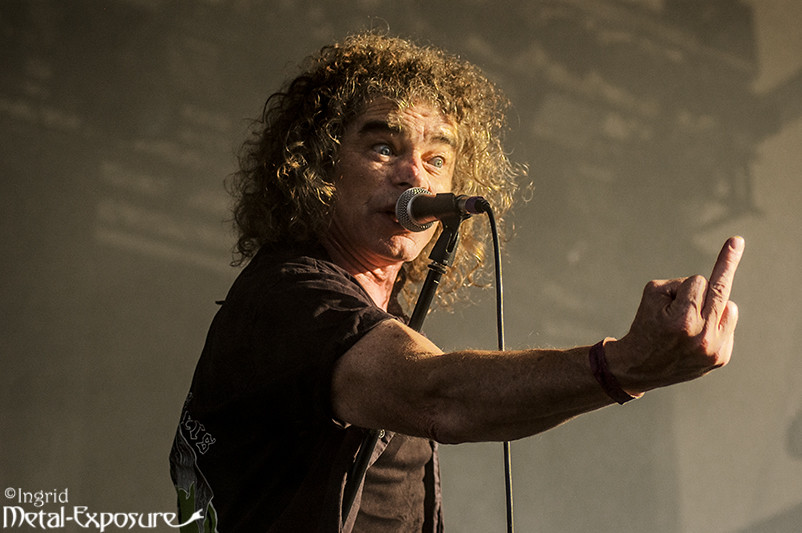 I was actually looking forward to this show, listening to some of the new Black Star Riders song to prepare for the festival, and very happy to hear the Thin Lizzy classics going to be played live. However, I’m afraid that the show didn’t quite deliver though. Although the band Black Star Riders (BSR) offers nice music and I actually kind of like their style, it was not a band to headline the festival. This was clearly reflected in the amount of audience that was left at the end. Normally headliners have the steps packed with people (as was the case with Venom and Kreator) but during this show, there were empty places all around and the audience did not look very impressed. During the Thin Lizzy-songs this changed of course, for example during The Boys Are Back In Town, when I spotted a lot of people jumping up and running down to the stage to party to this classic. This would only last for one song, however. Of course there were the BSR-fans who were clearly enjoying the show, but overall, this band would have been better off playing before Overkill – which would have been the better headliner!

All good things must come to an end, and so did this edition of Rock Hard. Quite fitting to the mood we were all in, Monday morning started with rain and drizzle. Always nice to have to build up your tent again when you´re at home so it can dry properly!
We would like to thank the Rock Hard Festival for having us again this year and creating yet again such a well-organized and relaxed festival! Respect for the always friendly security! In the 7 years that we´ve attended the festival, we never once had any complaints about the security – quite on the contrary, they were always relaxed, helpful and friendly. And everyone who goes to festivals regularly knows how important this is!
The line-up may not have been to everyones liking, but really, does it matter? This festival has a fanbase of its own – after all, this is THE festival of the Ruhrgebiet. And we sure as hell will be back next year!