After traveling across most of Europe (well, Norway and Sweden anyway) to see Enslaved (Bergen, Norway), the 13th of November reversed the roles: Enslaved was kind enough to play in De Helling (Utrecht), in our small if metal-dense country, The Netherlands. And to hell with weekends ending, for Monday is the new Sunday! (and as earlier noted by your ever observant reporters, with Sunday being the new Saturday, this makes kind of sense?). Well, whether it makes sense or not, it is a fine day to see a concert, bang your head and have a beer in the process. 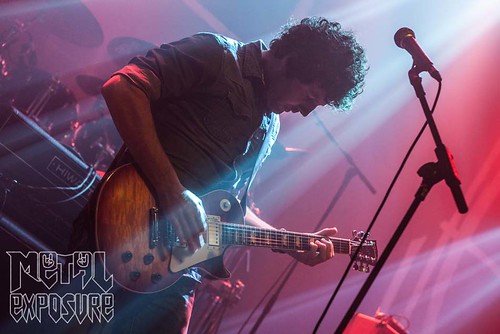 Supporting act Hidden Trails (Diest, Belgium) kicked off the show in the more or less half filled venue with their (slightly) psychedelic indie/rock. Not really what one would expect for a supporting act of Enslaved, at first glance. The three piece played very accessible indie/rock, although the psychedelic tinge was evidenced by the subdued vocals and the floating soundscapes and the occasional instruments-only piece. The music was extremely well played and the vocal qualities (although inappropriately subdued in the sound mix) of their front man (Jo Neyskens) were also high class. The drummer did his best to play the part of being a true animal. That was of course was funny to watch, but a bit uncalled for, given the slower pace compared a general metal blast beat. So after the initial glance I would conclude to say it does fit (albeit in an odd way) to Enslaved, who are currently treading a more progressive than extreme path. 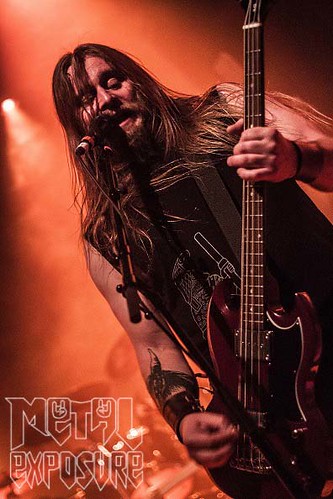 Progressive or no, the Norwegians of Enslaved always manage to put down very good shows. And tonight… was no different! Man, although they are old enough to have a keyboard player (Håkon Vinje) that is younger than the band itself, they still have an infective way of enjoying themselves through music. Kicking off with Storm Son of their latest album, E, Enslaved immediately showed that E also can be experienced in a more fast and aggressive atmosphere. Much to my liking, they also played Vetranott of Vikingligr Veldi, their very first album (1994). The guitar work of Ivar Bjørnson and Arve Isdal is such a pleasure to listen to, topped up by the intricate bass lines and vocals of Grutle Kjellson. The public also seemed to enjoy themselves massively in the by no fully packed venue (kuddos, on a Monday!). Ending with Sacred Horse? Nah, guess again. It took a bit of shouting, but an encore was granted. This last part featuring an awesome drum solo and of course the closer, the magnificent Isa.

The venue made for an intimate experience during the show and the ability to talk to Enslaved (posing as invincible (yes, that was intentional) orange finders here and there). And although rising the next day was a bit of a challenge (all hail Tuesday, the new Monday?) this was one of the most enjoyable Enslaved shows yet! 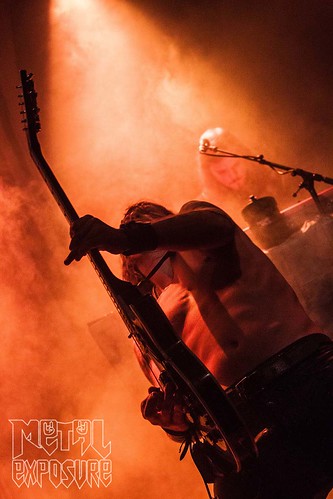 Pictures by Laetitia
Report by Wouter B.